Khamzat Chimaev responds to criticism from Jorge Masvidal: “How can you say that after getting KO’d stiff?”

Khamzat Chimaev did not mince words while responding to the recent comments made by fellow UFC star Jorge Masvidal.

It was a giant leap in competition for ‘The Wolf’, but one that he passed with flying colors according to UFC President Dana White.

While many fans and pundits are still sold on the idea of Khamzat Chimaev being the next big thing in mixed martial arts, BMF title winner Jorge Masvidal is not convinced.

During his recent appearance on the Impaulsive Podcast, ‘Gamebred’ was asked if he thought ‘Borz’ was beatable and responded with the following remarks.

“I don’t think s**t of him. He hasn’t fought anybody, you know. He’s gotta go fight some guys first. They (the UFC) talk big about everybody they think they can get money from. He can bring in those Arabic countries that got a lot of money. I haven’t seen one guy yet that he’s beaten and I’m like, okay, he beat up somebody good.”

Those comments obviously struck a nerve with the surging welterweight contender, as he proceeded to roast Jorge Masvidal for his previous knockout loss to Kamaru Usman.

“I saw Masvidal still saying that I didn’t fight anyone,” Chimaev said to Hustle MMA. “Who did he fight? How can you say that after getting KO’d stiff? Usman almost sent him to heaven!”

Masvidal (35-16 MMA) of course suffered a brutal knockout loss at the hands of Usman in the pairs highly anticipated rematch at UFC 261. ‘Gamebred’ has gone 3-5 over his past eight fights overall. 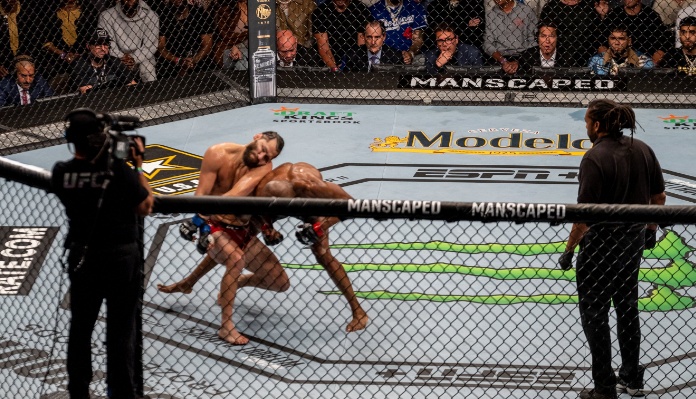 Khamzat Chimaev is rumored to be fighting Masvidal’s most recent opponent, Colby Covington, his next time out.

This article appeared first on BJPENN.COM
Previous articleBlagoy Ivanov plans to be better than ever when he competes for the first time in two years at UFC 274: “There won’t be any ring rust”
Next articleNate Diaz scoffs at Justin Gaethje’s claim that he’s jealous: “Jealous of what?”
© Newspaper WordPress Theme by TagDiv