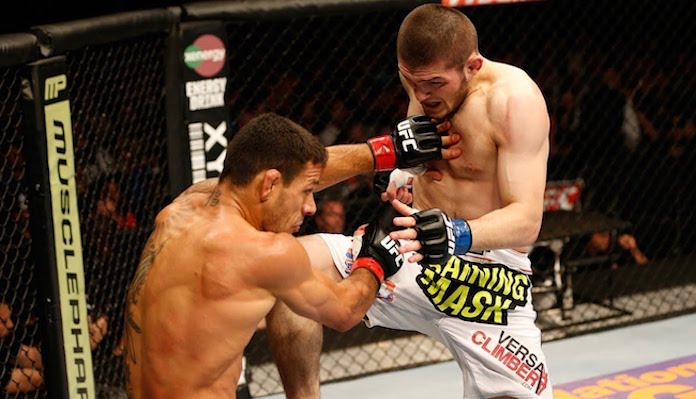 Khabib Nurmagomedov has taken to Instagram to reflect on his win over Rafael Dos Anjos way back in April of 2014.

Khabib, 33, (29-0 MMA), is a Russian former professional mixed martial artist. Competing in the lightweight division of the UFC, he was the longest-reigning UFC Lightweight Champion, having held the title from April 2018 to March 2021. It was in 2021 that ‘The Eagle’, with never tasting defeat after 29 professional bouts, officially announced his retirement from the sport.

Khabib Nurmagomedov posting a clip of the fight, wrote on ‘Instagram‘ (translated):

“Exactly 8 years ago my fight against Dos Anjos took place. Before this fight he had 5 consecutive wins and after fighting me he had 5 consecutive victories and in addition after my fight he became the Champion. Since after fighting with him in 2 months, I tore the front ACL ligaments and knocked him out of the championship race for as long as 2 years, and everything after that is history….I divide my professional career into 2 clips: The first section is 2008-2016. The second section is 2016-2021. I’ll tell you about this section some other time.”

Rafael Dos Anjos, 37, (31-13 MMA) is still competing in the UFC, his last bout taking place at UFC 272 in March of this year, where he defeated Renato Moicano.

Dos Anjos did indeed lose to Khabib back in 2014, after having won his previous 5 fights. Following the loss, the Brazilian went on to win his next 5 fights in a row in the Octagon.

As for Khabib, he established Eagle Fighting Championship, ‘Eagle FC’ in 2020 and is gainfully employed promoting his new venture.

Stay tuned for Khabib Nurmagomedov’s second section (2016-2021) clip in the near future.