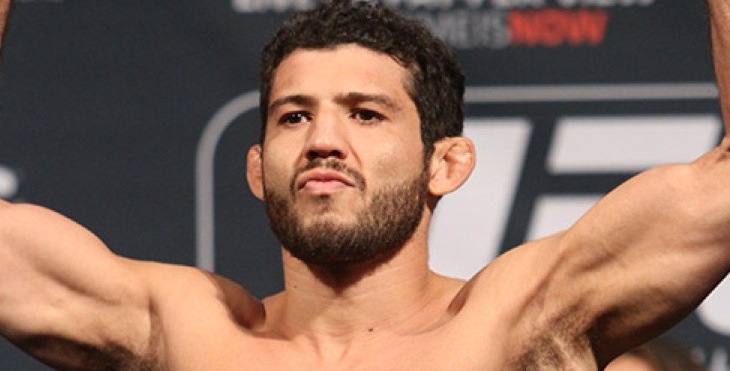 Gilbert Melendez won’t commit to retiring or continuing his fighting career just yet.

Last night (July 6), Melendez returned to action to meet Arnold Allen inside the T-Mobile Arena in Las Vegas for UFC 239. “El Nino” hadn’t competed since Sept. 2017. After three rounds of action, Melendez suffered his fifth loss in a row.

ESPN’s Brett Okamoto spoke to Gilbert Melendez following his unanimous decision defeat to Allen. “El Nino” had the following to say when asked about his fighting future:

“It’s hard to say. I don’t know man. It’s hard to just say it’s over. I love how Renzo Gracie will never retire. Who knows? Maybe five years down the road something will happen. But I think it’s safe to say I want to put my energy towards my team, towards my wife who’s a fighter, to all my members out there. And not leaning on them like that’s the reason I have to stop. I just think maybe I can thrive in those moments a little bit more. I’m gonna take some time off.”

“I ran into Ricardo Almeida back there. He’s like, ‘bro you did great. Two years off and you should just jump back in man. Of course you’re gonna do that.’ And I was like, ‘you know what, maybe I’ll get back in there next week. Maybe he’s right.’ It’s so much emotion with this fight game. It’s just a roller coaster ride. Again, I didn’t do it for people’s opinion. I didn’t do it because I care what people say or I’m gonna care if they’re talking crap on me. I did it when no one knew it. I did it before Forrest Griffin and Stephan Bonnar fought. I was eight, nine fights deep trying to explain to people at the bar what I was doing for a living. And then overnight, everybody knew what this was or what I was doing.”

Gilbert Melendez has gone 1-6 in his last seven outings. He hasn’t earned a win since Oct. 2013 against Diego Sanchez, who also competed on the UFC 239 card. Melendez admitted that fighting at the UFC event in San Francisco planned for later this year is enticing.