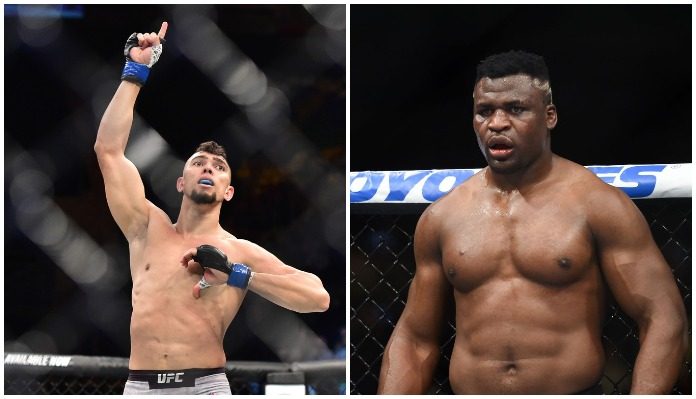 Johnny Walker is one of the more promising light heavyweight prospects in the UFC. The Brazilian is 17-3 as a pro, and 3-0 in the UFC, with all three wins coming by knockout in under two minutes.

Although he is light on experience in the Octagon, the 12th-ranked light heavyweight has his eyes on Francis Ngannou. The 27-year-old says he wouldn’t rule out a move to heavyweight and is confident he would beat Ngannou.

“Somebody asked who can stop this guy and I said why not,” Walker said to TSN’s Aaron Bronsteter. “I can go to heavyweight as well, I have size, I have power, everything is possible.”

Asked whether or not he would be scared to fight Francis Ngannou given his power, the Brazilian did not shy away.

“No, I have power enough to beat him,” he explained. “He has a lot of power and I respect him but it would be a very good fight as well and (fans) would like to watch.”

Currently, Johnny Walker is sidelined due to a shoulder injury he suffered doing the worm after beating Misha Cirkunov at UFC 235. Before that, he knocked out Justin Ledet just a month before in 15 seconds. And, in his UFC debut, he knocked out Khalil Rountree in just under two minutes.

Francis Ngannou, meanwhile, is coming off of a very impressive TKO win over Junior dos Santos just a week ago. The win secured himself as the number one contender at heavyweight. And, it also extended his winning streak to three which includes TKO wins over Cain Velasquez and Curtis Blaydes.

Both Johnny Walker and Francis Ngannou have been prone to finish fights early and would no doubt be an exciting fight for the fans to watch. When, or if, Walker moves up to heavyweight is to be foreseen. He said he wants to beat Jon Jones first. But, is not scared to go up and challenge Ngannou.

Who do you think would win a fight between Johnny Walker and Francis Ngannou? Sound off in the comment section, PENN Nation!