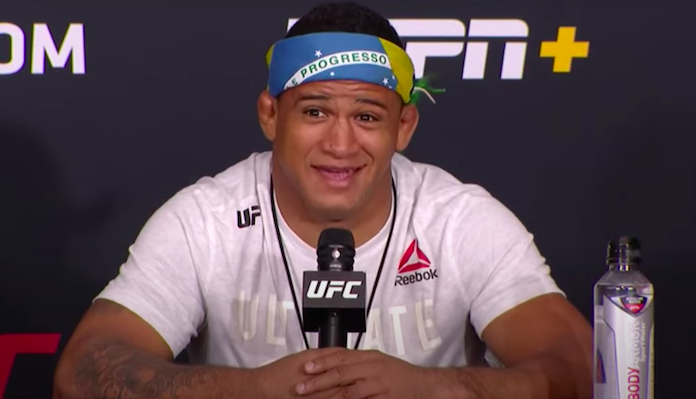 Edwards won a unanimous decision over Diaz at UFC 263 earlier this month, but he was rocked badly in the fifth round of the fight and was nearly finished. Still, he got the win and now Edwards is on a 10-fight unbeaten streak. With that kind of a winning streak, there’s no surprise that Edwards is out there stumping for a title shot. But UFC president Dana White has already said that Colby Covington is next in line to fight UFC welterweight champion Kamaru Usman, who defeated Burns earlier this year at UFC 258 by knockout.

Speaking to John Hyon Ko of South China Morning Post, Burns was asked if he thinks that Edwards did enough against Diaz to get the title shot, and the Brazilian doesn’t think so.

“I think Leon Edwards lost the shot just because he didn’t get a finish. He wasn’t hungry. Not even criticizing the guy. I think he fought very good. He’s a very smart fighter. But he’s not a finisher. If you go all day and sometimes just, as they say, bite the mouthpiece, and go forward, and finish the fight, sometimes you’re gonna get the shot,” Burns said (h/t MMA News).

“But if you just kinda point-fight, winning the fight, that’s good for you. You make more money, you’re changing contracts, you’re getting better, getting famous. But at the end of the day, the real fans, the real guys, the crazy guy with the ‘Just Bleed,’ those are the real fans. And they want to see violence. They want to see a finish. They go crazy when someone does a crazy knockout. And I just think he lost the shot (with) that performance.”

Do you agree with Gilbert Burns about Leon Edwards?