Count Dustin Poirier among those who are not a fan of Colby Covington. The UFC lightweight contender told Covington “it’s on sight” if he sees him at American Top Team.

Poirier made the comments on an Instagram post from ESPN that quoted Covington calling Poirier “childish.” (h/t/ Phillyphil9) 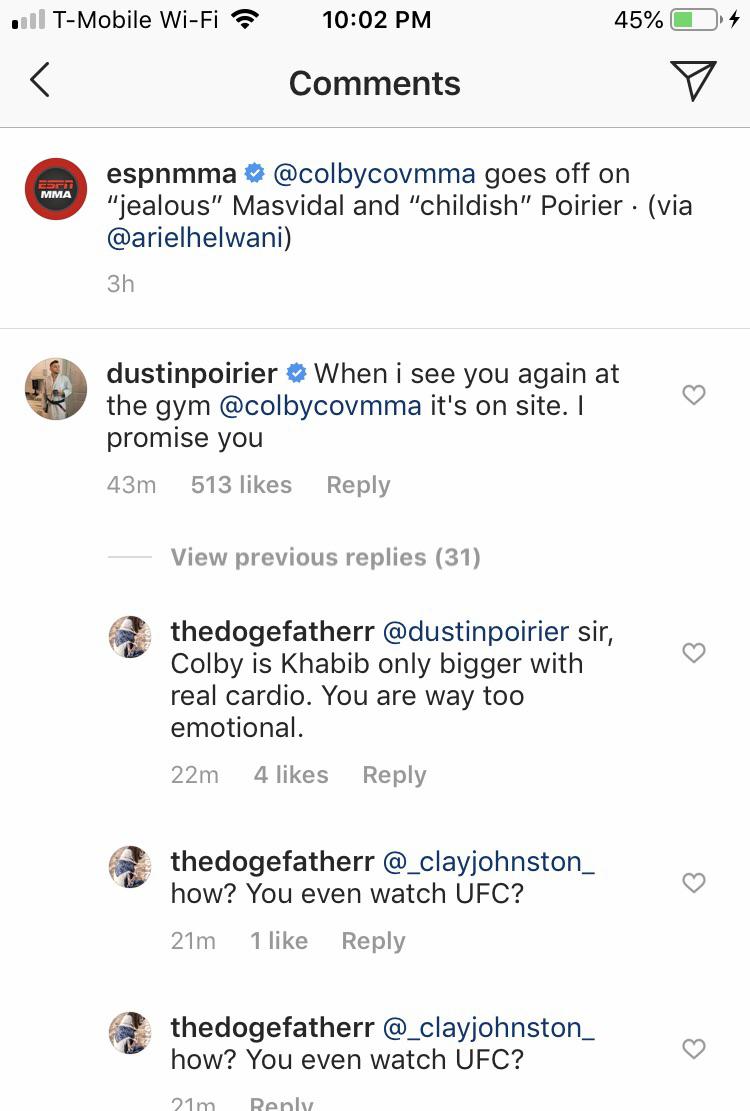 Covington has angered many of his teammates at American Top Team, who believe that he has sold out in his bid to become a star in the sport. Jorge Masvidal was Covington’s best friend for many years and the two have developed a true grudge in recent days. It was surprising to see Poirier also draw the ire of Covington, but it looks like no one is safe from Covington’s antics at this point.

Poirier is not a fan of Covington trash talking his teammates at American Top Team. In a recent interview, Poirier said this about Covington:

“I don’t sell out like f*cking Colby Covington and talk bad about people who I roll with,” Poirier said recently.

Poirier just lost by submission to Khabib Nurmagomedov at UFC 242 in his bid to unify the UFC lightweight titles. It was a devastating loss for Poirier, who has flip-flopped on retirement since the fight ended.

As for Covington, negotiations recently broke down for a welterweight title fight against Kamaru Usman at UFC 244. It’s still possible that fight is booked, but Covington recently said the UFC low-balled him on their offer for the fight, and until that financial offer improves don’t expect that fight to be booked.

In the meantime, you can expect Covington to continue to antagonize his teammates Poirier and Masvidal, putting the entire American Top Team gym in a very uncomfortable situation.

How do you think the growing rift between Colby Covington and his ATT stablemates like Jorge Masvidal and Dustin Poirier will shake out?