Dana White is reacting to the possibility of UFC 279 being Nate Diaz’s final Octagon appearance.

It will be Nate Diaz (21-13 MMA) vs Khamzat Chimaev (11-0 MMA) in the welterweight main event this coming Saturday, September 10th at the T-Mobile Arena in Paradise, Nevada.

Chimaev, 28, is coming off a unanimous decision win against Gilbert Burns (20-5 MMA) in April of this year at UFC 273. ‘Borz’ is aiming to keep his win streak alive and is considered the favorite coming into Saturday’s bout.

It will be the final fight on Diaz’ current UFC contract and could be the last time Diaz steps inside the Octagon.

In speaking at the ‘Contender Series Week 7’ post-fight press conference, UFC President, Dana White weighed in on Diaz’s career with the promotion:

“This kid came in on The Ultimate Fighter. He’s fought in incredible wars for us. He’s been a very big part of this company for a very long time.” 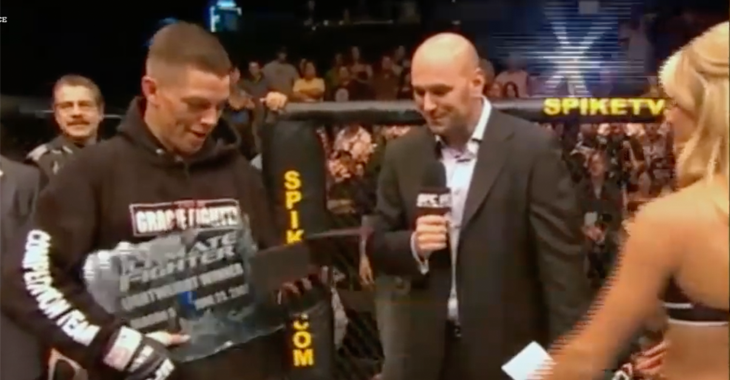 “White says if Nate Diaz is making this his last fight with the UFC that he wishes him nothing but the best and it’s been fun working with the Diaz brothers. He says they are legends of the sport and legends of the UFC.”

It has been a storied career for Nate Diaz, with ups and downs, elations and defeats, but overall the fighter has become a fan favorite and no doubt will be the ticket to watch when he enters the Octagon to take on Chimaev at UFC 279 this Saturday night.

Will you be watching? Do you think Diaz can pull off a win for perhaps his last Octagon appearance?

This article appeared first on BJPENN.COM
- Advertisement -
This article appeared first on BJPENN.COM
Previous articleJohn McCarthy and Josh Thomson slam the UFC for not giving Nate Diaz a proper send-off: “Diaz probably garnered the UFC somewhere between 500 million to a billion dollars”
Next articleTony Ferguson explains his decision to move up to welterweight for UFC 279: “This is where I hang my hat”