Colby Covington claims Jon Jones is trying to get one final cash grab with Francis Ngannou fight: “He’s done, he doesn’t have the right scientist, the right juice to do anymore.”

Jones (26-1 MMA) vacated his light heavyweight title last summer in hopes of making a run at the promotions heavyweight championship. It was initially thought that ‘Bones’ would fight the winner of March’s rematch between Francis Ngannou and Stipe Miocic.

However, after ‘The Predator’ dethroned Miocic by way of second round knockout at UFC 260, negotiations between Jon Jones and the UFC quickly fell apart. 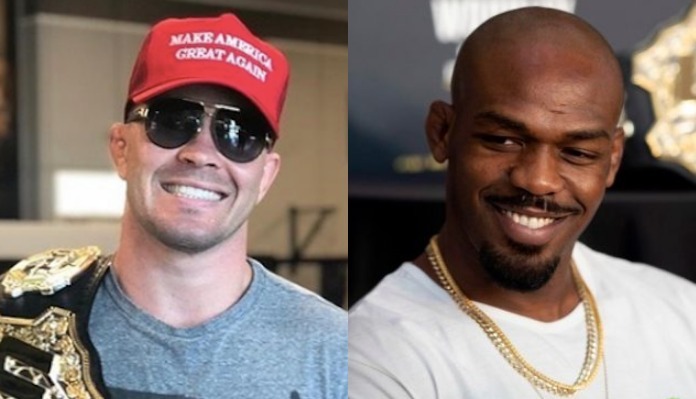 According to the UFC’s top welterweight contender in Colby Covington (16-2 MMA), his former college roommate Jon Jones is simply trying to score the biggest payday possible for his next fight because “he knows he’s done”.

“No, he’s [Jon Jones] not fighting at heavyweight man,” Covington said on the MMA Roasted podcast (h/t Essentially Sports). “He’s done, he doesn’t have the right scientist, the right juice to do anymore. He knows he’s done. He’s trying to get one more cash grab and hope that it’s so much money that he doesn’t have to do anything but I don’t think he’s ever fighting again. I just don’t see it.”

“If he wanted a fight, he would have fought already. He would have went back to light heavyweight and fought Jan or something. He’s too small for heavyweight man. He’s just looking to get a big cash grab with Francis but he knows he’s going to get knocked out so he’s trying to get as much money as he can to take that ass beating.”

Jon Jones recently brought on former Golden Boy Promotions CEO Richard Schaefer as his advisor in hopes of reaching a deal with the UFC. That move seems to have given Dana White and company renewed optimism.

As for Colby Covington, ‘Chaos’ is hoping to secure a rematch with current welterweight champion Kamaru Usman as his next fight.

This article appeared first on BJPENN.COM
Previous articleBrandon Moreno knows he can “support the damage” and “be more aggressive” in UFC 263 rematch with Deiveson Figueiredo
Next articleChuck Liddell does not think Jake Paul will accept his challenge: “He’s going to risk getting hurt like that?”
© Newspaper WordPress Theme by TagDiv