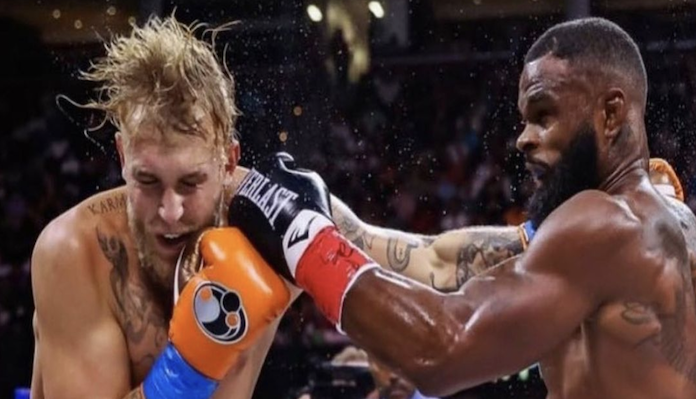 Paul was supposed to headline a Showtime pay-per-view boxing card on December 18 against Tommy Fury. It was an intriguing matchup but on Monday, it was revealed Fury was out of the fight due to an injury and Woodley will now rematch Paul, yet Sonnen isn’t a fan of it for Paul.

“This is the biggest mistake of Jake Paul’s short career,” Sonnen said on his YouTube channel (via Mirror). “Absolutely, without question, this is the biggest risk he could possibly take. To fight Tyron Woodley – who by the way is training all the time – Jake is not getting a softball down the middle. He’s getting a very hard fight against his No. 1 rival who is completely motivated to fight and defeat him and Jake wasn’t even thinking about the guy.”

As Sonnen says, Woodley will no doubt be motivated by the loss as Paul beat him by split decision in August. In the fight, “The Chosen One” had rocked him but didn’t throw enough punches to finish the job. Along with it being a tough fight, even if Jake Paul wins, he doesn’t gain much from it.

Even if Paul doesn’t gain much from beating Woodley again, Chael Sonnen says this proves the YouTuber is a real fighter.

“Jake is willing to step in because he follows the golden rule of show business which is that the show must go on,” Sonnen continued. “So when I tell you this is a huge mistake from Jake, I am right, but it’s because he is willing to make that mistake that you must accept him into the club. He doesn’t have to beat Tyron Woodley, he already did, what he does have to do is show up and show a respect to the rest of the card who is counting on that paycheque.

“Their holidays are going to be very different if Jake is not there, Showtime [the event’s broadcaster] have taken all the risk, believed in him and set this thing up and he’s shown them respect,” Sonnen added. “He absolutely did, and in a matter of fact he took this thing one step further and told Tyron Woodley that he’ll give him $500,000 if he can knock him out.”

Jake Paul vs. Tyron Woodley 2 will go down on December 18 in Tampa.