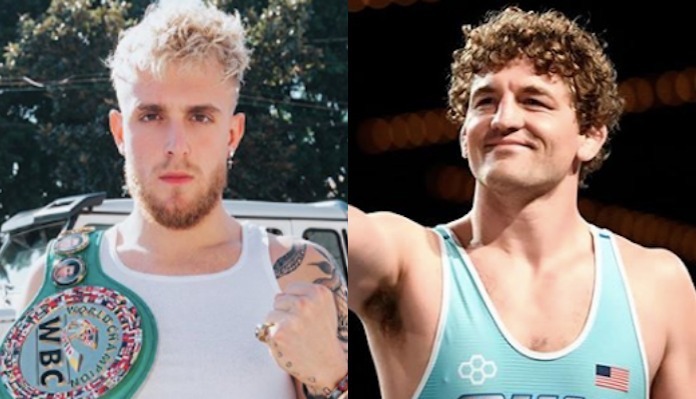 Paul is the talk of the combat sports world this weekend, after improving to 2-0 as a pro boxer with a violent one-punch knockout of former NBA player Nate Robinson last weekend.

In the build-up to and fallout of this fight, Paul called out a host of MMA stars, most notably Conor McGregor, Dillon Danis, Jorge Masvidal, and Askren.

Askren, for what it’s worth, is down to meet Paul in the boxing ring. He’s also down to take the YouTuber on in pretty much any other form of combat.

“I’m not supposed to do live wrestling for a year post-surgery, which is September 1,” Askren said on Submission Radio this week. “Boxing, that seems kind of easy. Like, I’m sure I could do that. Like, there’s no shots, there’s no slams, there’s not leg locks. I dunno, that seems relatively safe to me.

“Most people are like, oh, I don’t know why Ben Askren would stoop to that level,” Askren continued. “It’s like, listen, when I was in high school, one of the fun things to do was, a bunch of dudes would come over to the house, we’d put on some boxing gloves and we’d try to beat the shit out of each other. Like, we did that for free, we just did that for fun. And now you’re telling me you’re gonna pay me a whole bunch of money to beat up a YouTube star. Like, I don’t know, that just sounds like a fun Friday night to me…

Askren also offered an assessment of Paul’s KO of Robinson, claiming it didn’t really provide a lot of information about the YouTuber’s boxing ability.

“It’s hard to say when you’re going against someone who’s that bad,” Askren said. “I watched the highlights, Nate Robinson, good god. I mean, honestly, it looked like he’d never been boxing before. For someone who’s such an elite athlete – I mean, this guy’s a very elite athlete, he was a great basketball player – he couldn’t box worth a damn. So, I guess Jake Paul has as least enough power to put Nate Robinson to sleep. I don’t really know if that tells us very much…

“Obviously I’m someone who is a high-level fighter, who has a large following, who was maybe not known for his stand-up. I think that’s probably what he’s thinking. But, I’ve worked out with some other guys, just kind of been around, and they’re not fighters, and they… every fat guy on the couch in America thinks he can fight, right? They really do. And then once they feel what it really feels like, it’s just different. There’s just this gap. Like, they don’t understand what it really feels like.”

Do you think Ben Askren and Jake Paul will end up fighting?