CSAC helps regulate extreme weight-cutting for MMA fights in California. For health and safety, the commission advises fighters not to rapidly cut and regain more than 10% body weight between weigh-ins and fight night.

The CSAC provided a break down of weight increases for Saturday’s UFC 241 pay-per-view event at the Honda Center in Anaheim, California. Fighters such as Paolo Costa and Yoel Romero smashed the recommended weight gain. 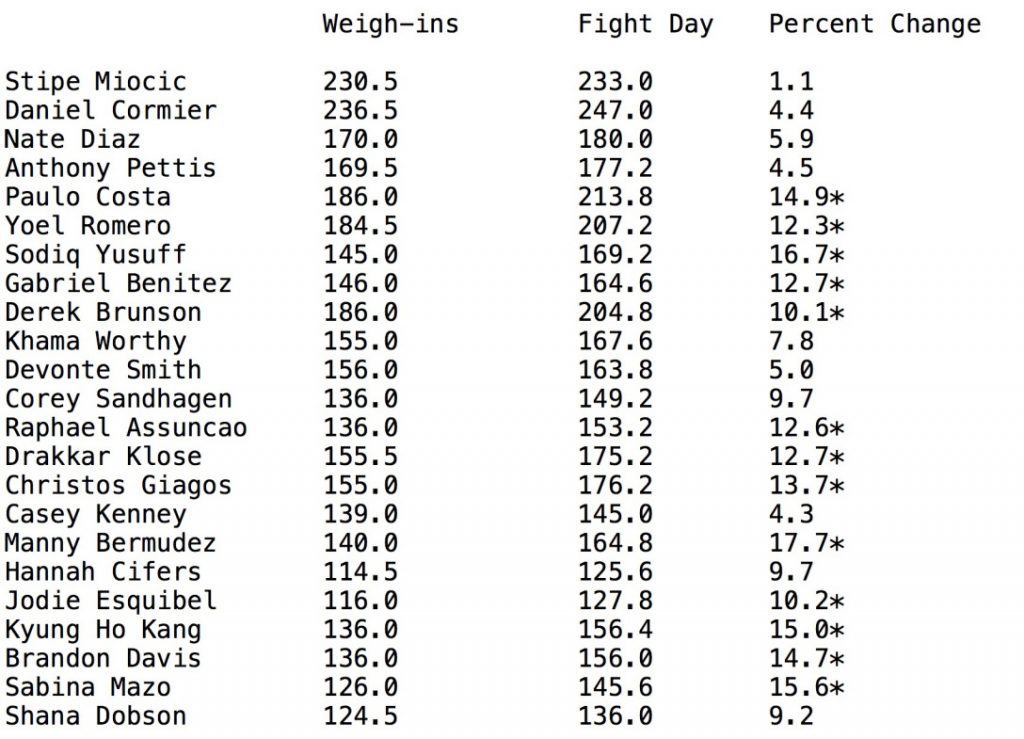 More than half of the fighters broke the 10% recommendation. Manny Bermudez leads the pack with a significant 17.7% weight increase between weigh-ins and fight night. Stipe Miocic maintained the closest weight, with only a 1.1% increase.

Manny Bermudez lost a unanimous decision in favour of Casey Kenney in a 140-pound catchweight bout on the UFC 241 undercard. Meanwhile, Miocic regained his heavyweight belt with a fourth-round TKO victory.

The rule was created to prevent fighters from cutting excessive weight, however, the commission does not fully enforce the rule. The CSAC will only force fighters to move weight class or disqualify them under extreme circumstances. Aspen Ladd had her bantamweight license revoked this month until she can provide evidence that she can safely participate in the division without extreme cutting. CSAC executive director Andy Foster says Manny Bermudez will have to move up to featherweight for future bouts under CSAC jurisdiction. The consequence for the other 12 fighters is unknown.

Foster and the commission intend on tightening regulation for this rule and cancelling MMA bouts if participants exceed a 10% weight increase. Commentators such as Joe Rogan, have also recommended hydration tests to prevent fighters from cutting weight dangerously. How do you think the weight cutting problem in MMA should be handled? Are you surprised there were so many extreme cuts at UFC 241?