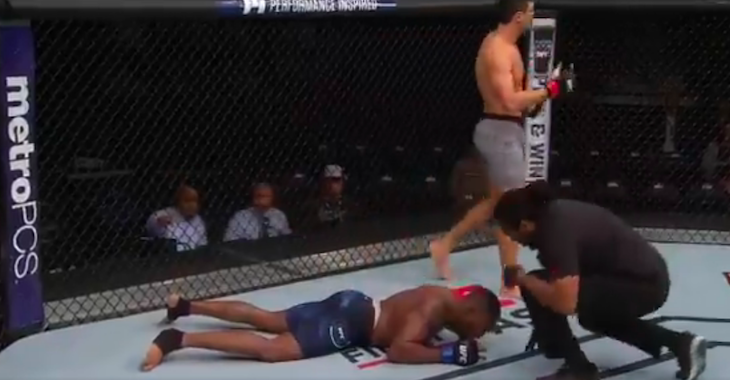 In the first bout of UFC on Fox 26’s Fox Sports 1 prelims, Italy’s Alessio Di Chirico stepped into the Octagon with dangerous puncher Oluwale Bamgbose in an interesting middleweight tilt.

Despite a mind-numbingly boring first-round, during which neither fighter really did anything, Di Chirico ultimately found a way to win in truly emphatic fashion, levelling his foe with a brutal knee to the face. The impact of this knee caused Bamgbose to careen, face-first, into the canvas, where he recovered several minutes later. See this insane knockout, which is a late contender for Knockout of the Year, below.

With this win, Alessio Di Chirico rebounded from a submission loss to Eric Spicely. He’s now 11-2 overall and 2-2 in the UFC.Oluwale  Bamgbose, meanwhile, is now 6-4 overall and a tough 1-4 in the Octagon.

Stay tuned for more UFC on Fox 26 results as they occur.