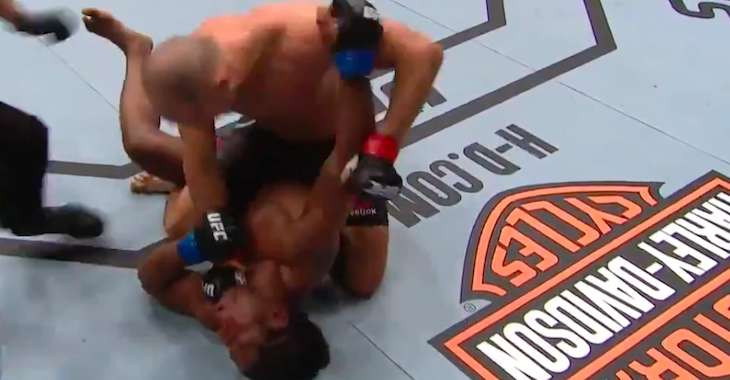 England’s Galore Bofando entered his UFC on Fox 26 showdown with Chad Laprise with mountains of hype attached to his name. This fact, of course, could be attributed to his dynamite UFC debut, in which he knocked out Ireland’s Charlie Ward with a slam.

While Galore Bofando very nearly knocked his Canadian foe out in the first frame, his hype was ultimately deflated, as Laprise recovered from this early knockdown, secured a takedown, climbed into full-mount and rained down the ground-and-pound for a first round TKO victory. While Bofando clearly has plenty of potential, he frankly looked lost on the mat with his more experienced foe.

See the fight-ending sequence below:

With this win, Laprise moves onto an impressive three-fight win-streak, having also recently stopped Thibault Gouti and Brian Camozzi. He’s now 13-2 overall. Bofando, meanwhile, is now 5-3 in sum. With this result, he experiences the first legitimate loss of his career, having only lost by disqualification before tonight.

Just realized that both of Galore Bofando’s 2 losses came via DQ. Considering he’s only fought 7 times, that’s pretty weird. Interested to see more of him tonight.#ufcwinnipeg

Stay tuned for more UFC on Fox 26 results as the card unfurls.