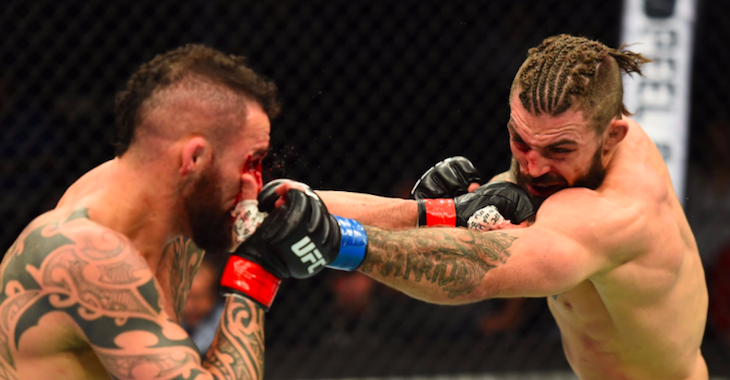 The second bout of the UFC on Fox 26 main card occured in the talent-rich UFC welterweight division, where all-action knockout artists Santiago Ponzinibbio and “Platinum” Mike Perry collided in an early frontrunner for Fight of the Night honors.

This contest did not disappoint.

For three, wild rounds, Perry and Ponzinibbio exchanged heavy artillery, forcing momentum shift after momentum shift and bloodying one another badly in the process. In the end, however, a sharper Ponzinibbio began to steal the momentum in the bout’s second half, battering an exhausted Perry through the latter round and a half to capture a unanimous decision victory.

These dudes are leaving all on the line. #UFCWinnipeg pic.twitter.com/VOQLNb4z3x

Perry, meanwhile, loses for just the second time as a pro. With this outcome, he returns to the loss column after absolutely violent knockout wins over Jake Ellenberger and Alex Reyes. The fan favorite is now 11-2 overall, and 4-2 in the Octagon.

Stay tuned for more UFC on Fox 26 updates as the card continues to unfold.