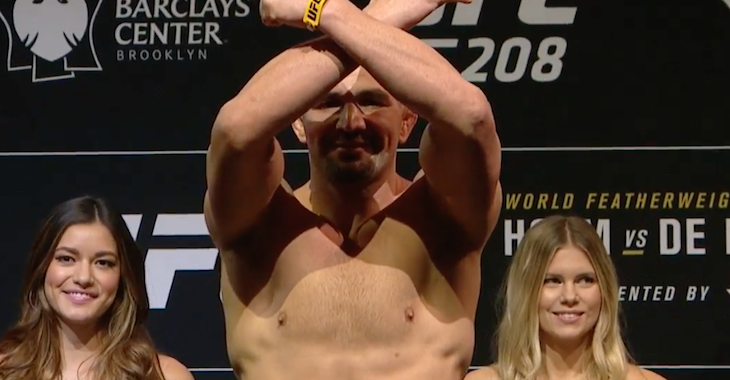 The first fight on the UFC on Fox 26 main card occurred in the light heavyweight division, where former title challenger Glover Teixeira and Canadian contender Misha Cirkunov collided in a clash of top-10 fighters.

The bout began with Cirkunov pouring on the pressure on the feet. From there, however, Teixeira was able to drag the encounter to the mat. After briefly threatening with a rear-naked choke, he rolled into back mount, sat up, and poured on the ground and pound until Cirkunov could take no more. The TKO occurred at the 2:45 of the first round. See it unfold below:

With this result, Glover Teixeira rebounds from a tough knockout loss to Alexander Gustafsson, and reasserts himself as one of the light heavyweight division’s top contenders. The former title challenger is now 10-4 in the UFC, and 26-6 overall.

Misha Cirkunov, on the other hand, now finds himself on the first two-fight skid of his career. After a sterling start to his UFC career, he has succumbed to first round stoppages dealt by Volkan Oezdemir and Glover Teixeira in the year 2017. He’s 13-4 overall, and 4-2 in the Octagon.

What did you think of Glover Teixeira’s huge win at UFC on Fox 26?