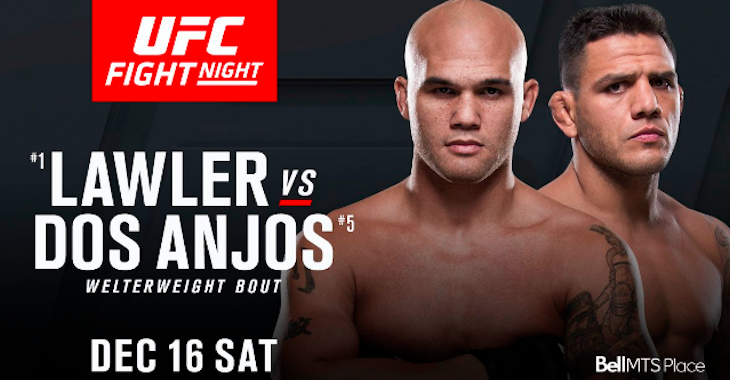 This Saturday, the UFC will return to Winnipeg, Manitoba, Canada with UFC on Fox 26.

This event’s stacked main card will air on Fox. In the main event, former welterweight champion Robbie Lawler will take on former lightweight champion Rafael dos Anjos in a bout that could well produce the next challenger for reigning welterweight champ Tyron Woodley. Elsewhere on the main card, long-time UFC featherweight contender Ricardo Lamas will take on Team Alpha Male prospect Josh Emmett, who steps in on short notice to replace Jose Aldo. The other two features of the four-fight main card, finally, are a welterweight contender bout between knockout artists Santiago Ponzinibbio and Mike Perry, and a light heavyweight showdown between top-10 fighters Glover Teixeira and Misha Cirkunov.

Here’s a complete run-down of this anticipated UFC on Fox 26 card, as well as the start times for each portion of the broadcast.

Which fight on the UFC on Fox 26 bill are you most excited for? Join the conversation in the comments section!