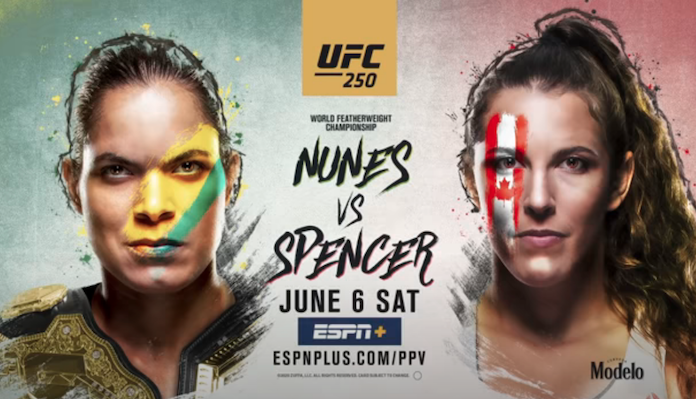 The Octagon returns to Las Vegas for UFC 250, a twelve-bout fight card headlined by a featherweight title fight between Amanda Nunes vs. Felicia Spencer.

Nunes, who also holds the promotion’s bantamweight strap, will look to earn her first career featherweight title defense against Spencer this evening. ‘The Lioness’ captured the promotions 145lbs title in unforgettable fashion by knocking out Cris Cyborg at UFC 232.

Since dismantling Cyborg in December of 2018, Amanda Nunes has gone on to successfully defend her bantamweight title against Holly Holm and Germaine de Randamie.

Meanwhile, Felicia Spencer (8-1 MMA) is coming off a first round TKO victory over Zarah Fairn Dos Santos in her most recent effort this past February. The Canadian has gone 2-1 under the UFC banner, with her lone loss coming to the aforementioned Cris Cyborg by way of decision.

UFC 250 will be co-headlined by a bantamweight fight between former division champion Cody Garbrandt and long-time contender Raphael Assuncao.

‘No Love’ will enter tonight’s contest looking to snap a three-fight losing skid, this after suffering knockout losses to TJ Dillashaw x2 and most recently Pedro Munhoz.

Meanwhile, Assuncao finds himself in a similar position having lost his last two contests. In his most recent effort at UFC 241, the Brazilian was defeated by Cory Sandhagen.

Get all of the UFC 250: ‘Nunes vs. Spencer’ Live Results and Highlights below:

Raphael Assuncao vs. Cody Garbrandt – Garbrandt def. Assuncao via KO (punch) at 4:59 of Round 2

Cory Sandhagen vs. Aljamain Sterling – Sterling def. Sandhagen via submission (RNC) in Round 1

Sean O’Malley vs. Eddie Wineland – O’Malley def. Wineland via KO in Round 1

Herbert Burns vs. Evan Dunham – Burns def. Dunham via submission (RNC) at 1:20 of Round 1

🇧🇷 @HerbertBurnsMMA is not here to mess around!

Who are you picking to win tonight’s UFC 250 fights? Share your thoughts in the comments section PENN Nation!