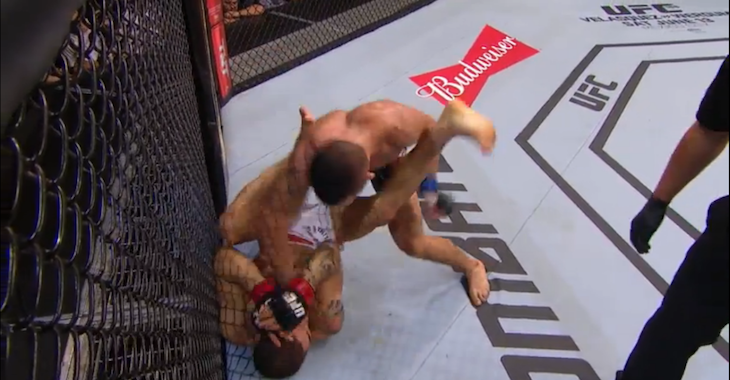 Round one begins and Bektic steps into the pocket but is forced to retreat as Lamas fires off a combination. Lames with a low kick attempt that misses. Bektic circles and then lands a kick to the body. Lamas shoots in for a takedown and gets it. Bektic immediately pops back up to his feet. Lamas has him presses against the cage and fires off a knee. The fighters jockey for position and now it is Bektic with Lamas pressed against the cage. Bektic with some hard knees. He switches to punches aimed at the body. Lamas breaks free and circles out. Bektic with a nice body kick. Lamas misses with a head kick attempt. Bektic throws a punch and Lamas slips while avoiding an attempting a kick. Ricardo gets back up but Bektic is on him and presses him back up against the cage. Lamas breaks free and then grabs a hold of Bektic. He drops for a guillotine choke but Bektic is out and now in top position. Lamas is able to scramble to his feet. He fires off a big head kick that just misses before the horn sounds to end round one.

Round two begins and the fighters get busy instantly. Both men with shots in the pocket. They clinch up and Bektic lands a knee. He presses Lamas against the cage and fires off a pair of knees. Ricardo eventually breaks free. He circles and then shoots in for a takedown. He cannot secure the position and Bektic is back up and throwing punches. He lands a couple of nice strikes and presses Lamas back up along the cage. Ricardo once again breaks free. Bektic with a nice elbow. Lamas smiles. He shoots in for a takedown but once again denied. Bektic with a left hand. The horn sounds to end round two.

Round three begins and Bektic immediately shoots in and presses Lamas against the fence. He works in some uppercuts and then a knee. Lamas scrambles and break free. He circles left and then takes the center of the octagon. He misses with a head kick and Bektic is able to get inside and secure a takedown. He moves to side control. Lamas quickly gets back to half guard. He scrambles and locks in a guillotine choke. It appears to be tight. Bektic fights out of the submission hold and both fighters return to their feet. Lamas once again gets a hold of a guillotine choke. Bektic remains composed and eventually breaks free. Bektic is now on top. Lamas secures full guard and still has a hold of Bektic’s neck. The fight comes to an end shortly there after as the horn sounds to end round three.