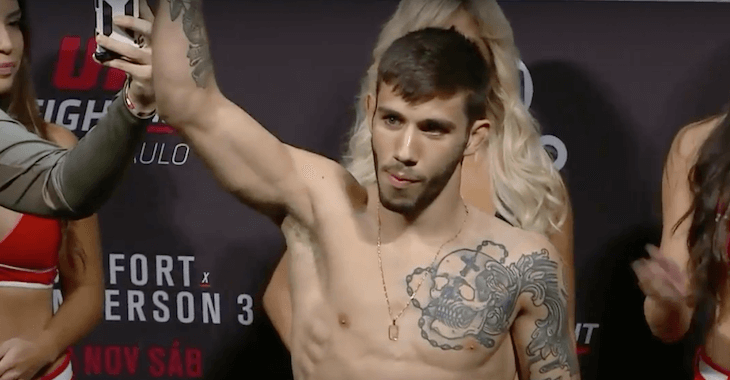 A flyweight scrap between Matheus Nicolau and Louis Smolka kicked off tonight’s UFC 219 prelims on FS1 from T-Mobile Arena in Las Vegas.

Round one begins and Smolka lands a good kick to the body. Matheus steps into the pocket and lands a heavy left hook. Smolka circles out and then comes forward with a jab. Nicolau counters with a nice right hand over the top. Smolka responds with an uppercut and then a hard kick to the body. Matheus circles out and then leaps in with a left hook that sends Smolka crashing to the canvas. Nicolau immediately jumps on the Hawaiian with some heavy punches. Smolka scrambles but Matheus winds up in full guard. After another scramble Smolka is back to his feet. Once again Nicolau lands a leaping left that floors Smolka. This time Matheus follows Louis to the ground and locks in an arm triangle choke. Somehow Smolka is able to escape and get back to his feet. Nicolau with another big left hook followed by some body shots. Smolka attempts to circle out but gets dropped from another hard left hook. Nicolau jumps on Smolka but winds up in an armbar. The horn sounds to end round one.

Round two begins Smolka lands a low kick followed by a right jab. Nicolau replies with a jab that reopens a cut on the face of Smolka. Louis circles out but Matheus stays on him and lands a left hook. The fighters trade shots in the pocket. Smolka lands a nice right hand. Nicolau throws a jab to the head and then one to the body for good measure. Smolka continues to press forward and lands a kick to the body. Nicolau counters nicely with a left hook. Matheus is just beating Smolka to the punch it seems. Both men are landing good shots in the pocket. Smolka with an uppercut but Nicolau replies with a straight right. The horn sounds to end round two.

Round three begins and Nicolau lands a nice jab to the body. Smolka comes forward with a nice jab. Nicolau replies with a left hook and then proceeds to trip Louis to the floor. Smolka scrambles back to his feet and then lands a right. Once again Nicolau immediately counters with a left hook. Matheus with a hard body shot and then a body kick. Smolka circles out and then leaps in with a jab. Nicolau ducks under the punch and then scores a nice double leg takedown. After some short shots from top position, Nicolau opts to let Smolka back up to his feet. Smolka with a body kick. Nicolau scores a trip takedown and winds up in side control. He works some short shots to the body and then takes the neck of Louis. Smolka refuses to submit to the hold and fights it off until the final horn.