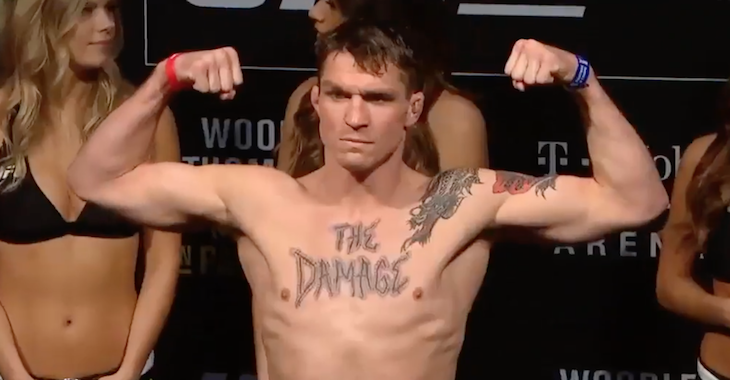 Round one begins and Bektic starts out quickly with a combination. He connects with a left and then a nice right hand over the top. Another big left and then a hard right from Bektic. He shoots in and scores an easy takedown on Elkins. Mirsad quickly moves to side control and begins raining down some hard elbows. Darren is already busted open and bleeding badly. Bektic with some right hands. He begins working some elbows. He gets Darren in a crucifix position and begins raining down elbows and punches. Elkins is able to scramble and get back to half guard. Still, Mirsad continues his assault with some big punches and elbows. Bektic postures up and delivers some heavy shots. Darren Elkins is a bloody mess and there is still a minute remaining in the opening round. More huge shots and hammer fists from Bektic. He is mauling Elkins here. The horn sounds to end round one.

Round two begins and Elkins misses with a jab and then a body kick. Bektic quickly shoots in and takes Elkins to the floor. Darren does a good job of getting back to his feet but eats a hard knee to the body for his efforts. The fighters clinch against the cage and Darren lands a nice knee. Mirsad breaks free and lands some big shots. Elkins is able to grab a hold of Bektic and drag him to floor. He looks to take the back of Mirsad but Bektic gets back to his feet and breaks free of the clinch. Mirsad lands a nice right hand and then another. He shoots in and scores a takedown. Darren pops right back up to his feet. However, Mirsad quickly scores another takedown and moves immediately to side control. Elkins is able to battle back to half guard but is eating some shots to the body and head from the position. Round two comes to an end.

So. Fast! @MirsadBekticMMA is lighting up Elkins at #UFC209 ⚡️ pic.twitter.com/NK6DcAyHJF

Round three begins and Elkins connects with a kick to the groin of Bektic to start and so we break. Upon restart Mirsad connects with a beautiful combination that ends in a hard right. Bektic ducks under a punch and shoots in for a takedown. Darren is able to defend the attempt. Bektic circles out and then comes forward with a hard right. Again Mirsad shoots for a takedown but is unable to get Elkins to the floor. He continues to work on a double leg and finally secures the takedown. Mirsad begins working from half guard. Elkins drops down for a heel hook but it is not deep. However, he is able to use the failed attempt to take top position on Bektic. He connects with a big right hand that stuns Bektic. He follows that up with a high kick and Bektic drops. Unreal finish!