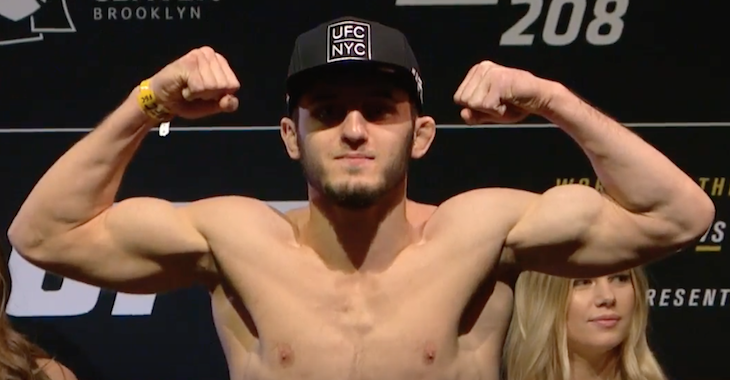 Round one begins and Nik immediately engages Islam in the clinch. Makhachev scores a quick trip takedown and begins working from full guard. Lentz locks up a guillotine choke but cannot secure the submission. Islam pops his head out and begins working some strikes. Nik scrambles but cannot get back up to his feet. Good top control here from Islam. He works some short strikes from the top. Lentz is working for another guillotine choke. He locks it up but it does not appear to be tight. Round one comes to an end.

Round two begins and Islam throws a pair of high kicks to start. Lentz blocks them both and presses forward. Nik with a right kick to the body. Islam responds with a nice combination. Islam just misses with a left high kick. He presses Lentz against the cage and drags Nik to the floor. Islam is working from half guard here. He lands a nice elbow and then a left hand. Nik attempts to scramble but cannot get back to his feet. Islam moves to the mount position but Nik quickly scrambles back to guard. Nik locks up another guillotine attempt but Islam quickly pops his head out. Islam connects with a hard elbow. He steps over in to half guard. One minute remains in round two. Islam moves to mount and as Nik scrambles he takes his back. Lentz scrambles and round two comes to an end.

Round three begins and Lentz throw a body kick and then a combination that misses. Islam circles out and then throws a jab. Lentz misses with a pair of low kicks. He connects with his third attempt. He chases Islam but Makhachev socres a hard body kick and then a knee. He presses Nik against the cage and then scores yet another trip takedown. Islam begins working from the half guard position. Makhachev with some nice hammer fists. He switches to some left hands and then begins working on a kimura attempt. Lentz rolls for a leg but it is not there. Islam lands a nice hard elbow. He moves to side control. Lentz scrambles but gives up his back. Some hard shots here from Islam. He locks in both hooks on Nik. Big shots from the back by Islam. He works for a rear-naked choke but Lentz is able to fight free and get back to his feet. Nik pushes Islam against the fence but Makhachev switches the position and lands a trip to end the fight.