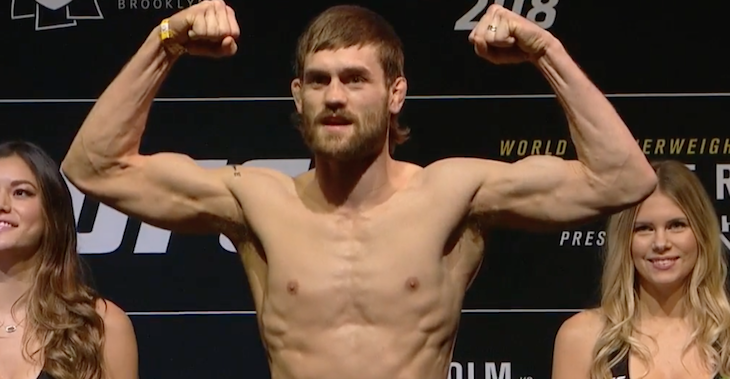 Round one begins and Nover starts off quickly. He lands a nice kick and then a right hand. Glenn attempts to fire back but misses with a left. He connects with a low kick but Nover immediately replies with one of his own. A beautiful high kick lands from Nover. Glenn somehow eats it and lands a counter left hand. Both fighters trade shots in the pocket. Nover presses forward and lands a side kick. He paws with a left jab. Glen presses forward but can not connect. Both men with some good shots in the pocket. Glenn pushes Nover up against the fence and searches for a takedown. He does not get it but lands some good knees to close out round one.

Round two begins and Nover lands a low kick to start. Glenn presses forward but Nover remains elusive with some solid footwork. Both fighters connect with left hooks. Glenn presses forward and lands a hard kick o the boy. Nover circles but Glenn is cutting him off now. Good low kicks from Glenn. He shoots in and presses Nover up against the cage. He grabs a hold of a double leg but Nover is somehow able to defend the takedown. Glenn is relentless here. He is still working hard to earn that takedown. Nover is using some excellent balance to stay on his feet. Nover lands a few uppercuts while pressed up along the cage. A solid knee lands inside for Glenn. The fighters break and Rick lands a good low kick. Nover is backing up to much here. Glenn continues his forward momentum and works some knees along the fence to end round two.

Round three begins and Nover lands a crisp left jab to start. Phillipe lands a solid left and then another. He is starting to use some good forward pressure here. Glenn circles and retakes the center of the octagon. Rick lands a hard inside leg kick. Nover responds with a hard left hand. He connects with a viscous leg kick and then another. Glenn didn’t like that and rushes forward and pushes Nover against the fence. Phillipe lands some good elbows while displaying some nice takedown defense. Not much offense from Rick here and the referee steps in and separates the fighters. Glenn quickly moves forward and engages the clinch. He immediately presses Nover against the fence in search of a takedown. Nover defends and circles out. Phillipe with a left hook. Glenn replies with a kick. He presses Nover back up against the cage and works some foot stomps. Glenn finally scores a takedown but Nover pops right back up. Glenn with a nice elbow to close out the fight.