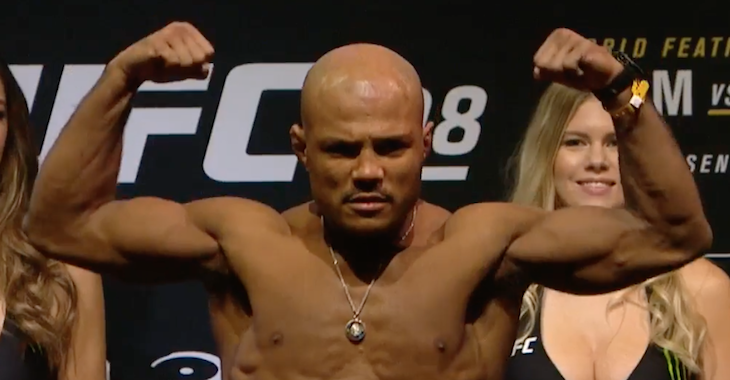 Round one begins and Sasaki lands a hard body kick early. Wilson misses with a left. He presses forward and lands a nice body combination. Ulka lands a pair of nice rights but Reis shoots in and lands a nice takedown. He quickly moves to half guard. Sasaki uses a Kimura attempt to get back to his feet. He lands a nice left jab. Reis shoots in but is unable to land a takedown. Another nice left jab from Ulka. He lands a right and then a front kick. Reis shoots in and scores a beautiful double leg. Sasaki immediately jumps on a kimura attempt. Reis passes guard and looks to lock up an arm triangle. It is not there but Reis lands a left hand. Wilson with some hard elbows. Sasaki gets back to full guard. He lands some good hammer fists from his back. Reis with another nice elbow and then another. Sasaki gets back to his feet just as round one comes to an end.

Round two begins and Sasaki quickly takes the center of the octagon. Reis lands a hard leg kick. He presses forward but misses with a combination. Wilson shoots in and easily scores a takedown. He quickly passes to half guard. Sasaki scrambles but Reis takes his back and locks in both hooks. Sasaki scrambles and gets back to his feet. Reis connects with a left hand and then a low kick. Sasaki shoots in for a takedown but Reis defends. Wilson then scores a takedown and winds up in full guard. Reis works some shots to the body and then the head. He takes the back of Sasaki and begins working for a rear-naked choke. He cranks the neck but Ulka is able to fight fre of the hold. Reis switches to some hammer fists from the top. Wilson transitions to the back on locks in a body triangle. He begins working a deep neck crank. Susaki breaks free of the hold but is in a bad position here. Sasaki is able to scramble and get back to his feet. He throws a jab but Reis ducks under and scores yet another takedown to close out round two.

Round three begins and Sasaki presses forward and lands a push kick. Reis throws a hard shot to the body followed by a right hand. Reis attempts a flying knee that misses but uses the momentum of the strike to push Sasaki against the fence. Ulka breaks free and lands a kick and then another. Both fighters miss with left hands. Ulka scores with a crisp jab. He goes upstairs with a head kick which is blocked. Wilson responds with a left hand and then shoots in for a takedown. He pushes Sasaki against the cage and scores a double leg takedown. After a brief stall in action, Sasaki returns to his feet. He lands a front kick on Reis. Wilson replies with a body kick and then a beautiful takedown. He begins working from half guard. Sasaki scrambles and winds up taking the back of Reis. He quickly secures a body triangle and begins raining down elbows. He switches to some short punches as round three comes to an end.