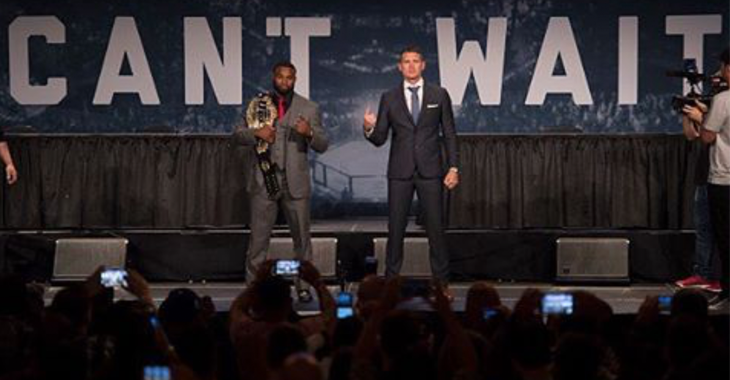 In exactly three weeks, UFC welterweight champion Tyron ‘The Chosen One’ Woodley will step into the Octagon in the co-main event of UFC 205 for his first title defense. The fight, which is slated to be against dynamic striker Stephen ‘Wonderboy’ Thompson, is one that has fight fans split down the middle in regards to who they think will win.

Ahead of the fight, Woodley has enlisted the help of young standout Sage Northcutt, who is now training at Roufusport in Milwaukee with Woodley for the fight. Woodley spoke in a mini-documentary about the camp, to discuss training with Northcutt, who he believes is a better version of ‘Wonderboy’:

“These young guys, man. Old man got to whip out those new tricks, because they come at you,” Woodley said about Northcutt. “I work with Sage. He’s obviously in a similar style as the opponent I will be fighting against.”

“He, just in my opinion, is just a little bit faster, and his strikes come with a little bit more force. His takedown defense should be better,” he said about the Karateka who also has a wrestling background. “His power should be better, so I’m actually training with a better version of what I’m going to compete with.”

“That’s how the circle of life goes in this sport,” he said. “The second you think you know everything — like yesterday, I’m going to be honest, he was catching me with all types of stuff that I didn’t see coming.”

“Like I said, put yourself in hellfire now. Don’t get out in the Octagon and somebody is going to come at you with something you didn’t know that’s coming.”

While Northcutt is highly regarded as one of the best up & coming prospects in the sport, Stephen Thompson is certainly a seasoned veteran in regards to striking. In addition to his 13-1 professional MMA record that has seen him pick up 7 spectacular knockout wins, including becoming the first man to TKO former welterweight champion Johnny Hendricks, Thompson has an outstanding 20-0 professional kickboxing record that has seen him win numerous world championships.

When Woodley and Thompson step into the Octagon on November 12th, do you think Woodley’s training with Northcutt will pay off?