Last night, the UFC returned to Mexico City, Mexico, with a compelling, 13-fight card. Though many of the matchups on the bill resulted in rather lacklustre decisions, the card was highlighted by several performances that were clear choices for post-fight bonuses.

The main event was one of these fights. That main event pitted former lightweight champion Rafael Dos Anjos with streaking contender Tony “El Cucuy” Ferguson. Over the course of the fight, the two top-ranked lightweights blasted one another with an incredible variety of strikes, from leg kicks, to knees, to punches, to plenty of spinning attacks. The end result was a dazzling, back-and-forth battle that would see Ferguson walk away with a hard-fought but well-deserved unanimous decision win. For this action-packed battle, Ferguson and Dos Anjos were both awarded $50,000 Fight of the Night checks.

Earlier on the main card, long-time featherweight contender Ricardo “The Bully” Lamas took on an inflated Charles Oliveira, who missed the featherweight cap by a whopping 9 pounds. Despite his resulting size and weight disadvantage, Lamas was able to brave a tough first round to catch his talented foe in a slick guillotine choke in the second round. With this fantastic submission win, The Bully regained his footing as one of the featherweight division’s very best players, and picked up a $50,000 Performance of the Night bonus as a result. 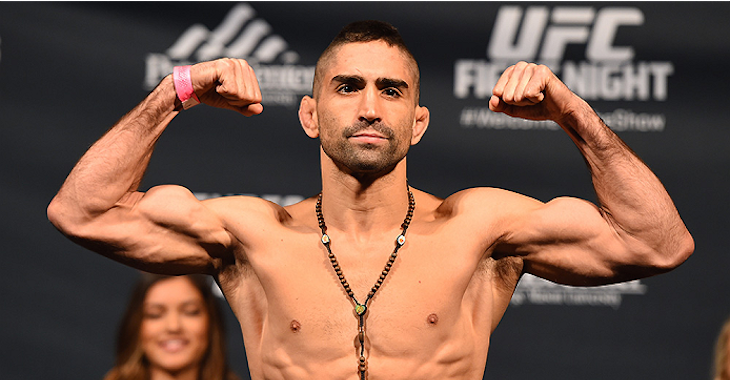 The final Performance of the Night bonus went to undercard fighter Douglas Silva de Andrade. Over the course of his undercard fight, de Andrade pelted his foe Henry Briones with the kind of shots that would have stopped many lesser fighters in their tracks. Though Briones was able to weather most of these shots, he was eventually put down for good by a beautifully-timed spinning back fist in the third round. This blistering attack would earn De Andrade a highlight reel TKO win, and a $50,000 Performance of the Night bonus. He’ll return to Brazil a much richer man, and with a ridiculous 24-1 overall record, a reputation as one of the bantamweight division’s most promising prospects.

Were you impressed by the performances of Ferguson, Dos Anjos, Lamas and de Andrade? Sound off, PENN Nation!