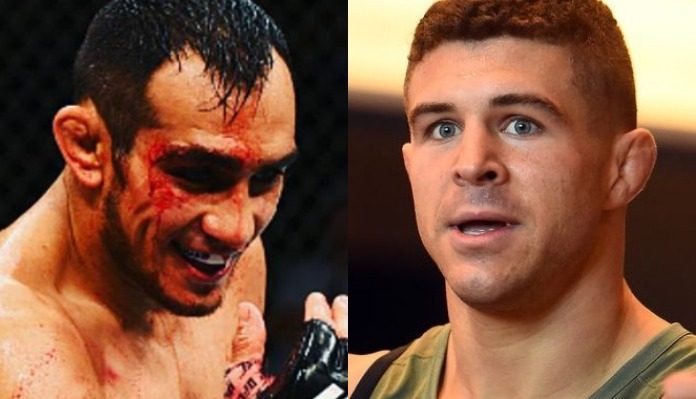 If things had gone to the original plan, former interim lightweight champion Tony Ferguson and Khabib Nurmagomedov would have battled for the UFC lightweight title at UFC 223. Regrettably, Ferguson sustained a freak injury just days ahead of the fight, and was ultimately replaced by Al Iaquinta, who battled Nurmagomedov in a last-minute title fight. Nurmagomedov won this fight by unanimous decision.

Since then, Ferguson has sought to discredit Nurmagomedov’s title win on the basis that it came against the UFC’s 11th-ranked lightweight on only one day’s notice. And now, Iaquinta has intervened.

On Sunday, Iaquinta responded to Ferguson’s comments on Twitter, which led to a heated back and forth between the two lightweight contenders.

See how it all unfolded below:

Bro you need to get off Twitter and shut it.. you blew it, you shoulda fought anyway. You lost your shot for good! this real estate agent would whoop you get dropped every fight

Damn Son You Didn’t Even Belong In That Cage, Although I WAS rooting For You, Weird Is Having To Make Your Own Name Plate At Media Day. Sad To See How You SOLD OUT To Fight For A Title When You Couldn’t Even Win The Title. Star Struck. Best Of Luck Kid. Get Back In Line.

I belonged more than you, you tripped on a rope

It’s Ok Kiddo, I Forgive You. I’m Not The One You’re** Really Angry At. One Day We Will See Each Other In The Octagon If You Keep Winning. #TUFGuys

Prior to his loss to Nurmagomedov, Iaquinta was on a five-fight win-streak, composed of impressive victories over Diego Sanchez, Jorge Masvidal, Joe Lauzon, Ross Pearson and Rodrigo Damm. The outspoken New Yorker is currently 13-4-1 overall.

Remarkably, Nurmagomedov and Ferguson have been scheduled to fight a whopping four times to no avail. After their latest nixed bout, UFC President Dana White assured he would never attempt make the bout again.

“Hell no,” White told ESPN shortly after Ferguson withdrew from UFC 223. “I’m never making that fight ever again. Ever.”

While White could stick to his guns on this one for awhile, his hand may be forced if Ferguson and Nurmagomedov keep winning. And in the meantime, it seems like Iaquinta and Ferguson might be interested in settling their differences in the cage.

Who do you think came out on top in this Twitter beef between Al Iaquinta and Tony Ferguson? Join the conversation in the comments section.