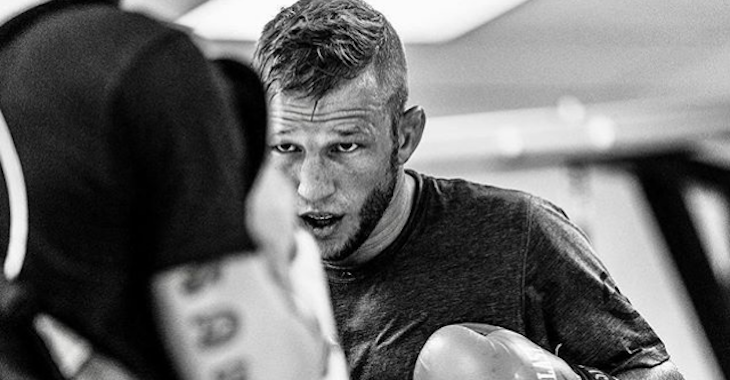 T.J. Dillashaw explains his decision to not accept a rematch with Cody Garbrandt at UFC 222!

Earlier this morning unfortunate news broke that current UFC featherweight champion Max Holloway had suffered an injury and would no longer be able to compete against Frankie Edgar in the main event of UFC 222 on March 3 in Las Vegas.

Shortly following that disappointing news, Ariel Helwani announced that the UFC was attempting to book two new fights for the UFC 222 pay-per-view event.

The first fight would have Brian Ortega replace Max Holloway and fight Frankie Edgar in a non-title bout.

The second would be a bantamweight title fight rematch between current title holder T.J. Dillashaw and former champion Cody Garbrandt.

While some media outlets reported the Garbrandt vs Dillashaw rematch as being official for UFC 222, BJPenn.com’s Chris Taylor spoke with sources close to the fighters who said the deal was far from done.

Despite reports, I'm told that @TJDillashaw vs. @Cody_Nolove 2 is NOT a done deal for #UFC222. I assume the UFC will have to offer TJ a ton of $$$ to save the event. Fighting Cody again comes with a lot of risk. Not only could he lose his BW strap, but also his superfight with DJ

A short-notice rematch with Cody Garbrandt would be a very risky fight for the UFC bantamweight champion of the world. After all, it was just announced two days ago that T.J. Dillashaw had entered into negotiations to fight Demetrious Johnson in the co-headliner of July’s UFC 226 event in Las Vegas.

While “No Love” did his best today to try and pressure Dillashaw into accepting the rematch, T.J. refused to cave. Instead Dillashaw continues to have his sights set on a super-fight with pound-for-pound great Demetrious Johnson.

Hey bang! Your fighter needed help to the stool after round one! You know what it is! Lighting doesn't strike twice, take the fucking fight bitchass mfers! I accepted! Balls in your court. @TJDillashaw

Spoke to @TJDillashaw. UFC asked him to accept a rematch against Cody Garbrandt to headline 222. Here’s what he had to say about it. pic.twitter.com/esl4dBRYXe

“It took me two to get a title shot back, now they want me to defend it on four weeks notice? I have a five-week old. I’m not training. My camp is in California and I’m in Denver right now. And all this to face a guy who doesn’t deserve a rematch to begin with? I lost a split decision to Dominick Cruz when I lost my belt, the UFC told me they thought I won that fight, and it still took me two years to get back to it. I had to wait through Cody’s back injury last year, all of the TUF bull—-. I told the UFC I am not doing it. I’m shooting for the DJ fight in July!”