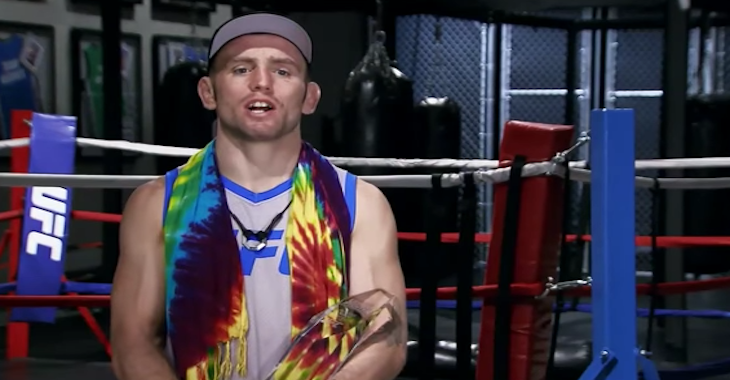 When Tim Elliott won season 24 of The Ultimate Fighter, it earned him not only a new UFC contract, but also the opportunity to battle dominant flyweight champion Demetrious “Mighty Mouse” Johnson. Given the fact that Johnson has already dispatched most of the flyweight division’s top fighters – some of them more than once – Elliott was given little chance in this rather untraditional title fight. Amazingly, however, he was able to give the champ a few scares, dropping him with a punch and threatening with a guillotine in their bout’s first round.

In the end, of course, Mighty Mouse would retain his title, walking away with a unanimous decision win. Yet even in defeat, Elliott proved that he absolutely deserves to be a part of the UFC flyweight roster.

Apparently, however, the recent title challenger is planning a departure from the division, having had enough of the brutal weight cut that it takes to get him there.

“I’d like to go up to [135 pounds],” Elliott told MMAjunkie at the event’s post-fight press conference. “The weight cut [for this fight] killed me. The morning of the weight cut I was hurting pretty bad. [It was] the first time I’ve ever told my coaches I was done.”

“I told James Krause I wasn’t going back in the sauna. I told him I would give up the 20 percent; I didn’t care about the belt. He made me get back in there. He made me cut the weight, and I appreciate that he did that. But everything about this sport is fun for me. I do it because it’s fun. It doesn’t pay that well, so I feel like I could really compete at 135, when I feel good and I feel strong.”

Do you think this is the right move for Elliott after giving the dominant flyweight champion such a good fight? Sound off, PENN Nation!