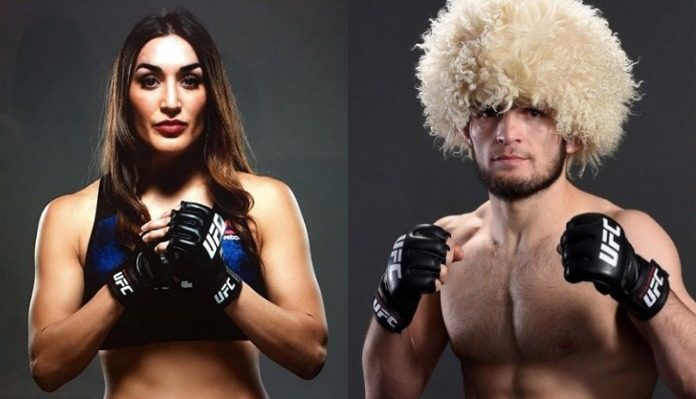 Last night, in the co-main event of the UFC’s debut in Santiago, Chile, strawweight wrestling specialist Tatiana Suarez picked up a dominant, first-round submission victory over the highly-regarded Alexa Grasso.

Suarez’s grappling dominance was so impressive in this fight that she was quickly compared to undefeated UFC lightweight champion Khabib Nurmagomedov, and absolute grappling juggernaut, post-fight.

Suarez has heard these comparisons, and as a big fan of Nurmagomedov, she’s all for them. In fact, she’s actually modelled a small part of her game after the lightweight champion.

“I love that comparison because I’m a huge fan of his,” Suarez said on Fox Sports 1 shortly after her victory over Grasso (transcribed by Sherdog.com). “I really base a lot of my wrist riding off of him. I do that a lot in practice. Actually, that’s what happened, I went for the wrist ride and she turned her back to me and I took her back off of it. Thank you Khabib for that because I learned from him.”

With her win over Alexa Grasso, Tatiana Suarez emerged from a lengthy layoff and improved her overall record to 6-0.

What do you think of comparisons between Tatiana Suarez and the UFC lightweight champion Khabib Nurmagomedov?