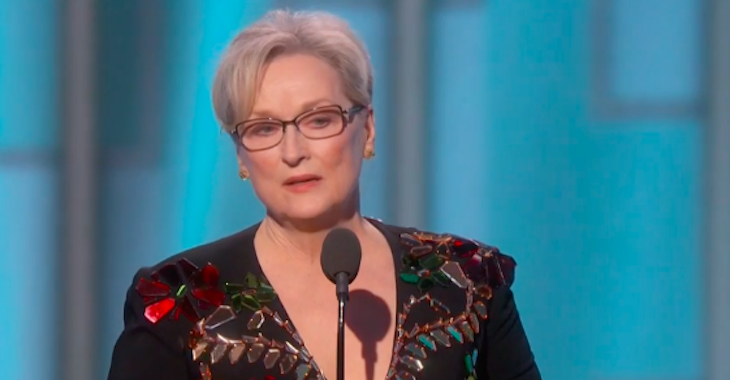 During Sunday’s 74th Golden Globes, Streep was honored with the Cecil B. DeMille Lifetime Achievement Award. In her acceptance speech for this award, Streep got fairly political, criticizing US President Elect Donald Trump, and ultimately, taking a jab at the great sports of mixed martial arts and football.

Meryl Streep gets political with anti-Trump message: "Join me in supporting the committee to protect journalists" https://t.co/0PpcjaEsi6 pic.twitter.com/Sc2GkmoMKO

“Who are we, and what is Hollywood anyway? It’s just a bunch of people from other places,” Streep said in the moments after her win. “So, Hollywood is crawling with outsiders and foreigners. And if we kick them all out, we’ll have nothing to watch but football and mixed martial arts, which are not the arts.”

This latter sentence, of course, did not go over well with the mixed martial arts community, who implored that the “A” in the MMA acronym is absolutely justified, and that MMA is indeed an art.

Perhaps the most notable member of the MMA community to offer a response to Streep was Bellator boss Scott Coker who, after claiming to be a lifelong Streep fan, extended the olive branch by inviting her to Bellator 170 in LA.

As a martial artist and an MMA promoter, here is my open letter and #Bellator170 invite to the very talented #MerylStreep #GoldenGlobes pic.twitter.com/zostN22RAK

Bellator 170 will be headlined by a light heavyweight clash between “The Bad Guy” Chael Sonnen, and “The Huntington Beach Bad Boy” Tito Ortiz – two hard-nosed wrestlers with a propensity for venomous trash talk. While Sonnen and Ortiz might not be the best choice of fighters to welcome Streep into the MMA fold, Coker is certainly on the right track. MMA is as international and gender inclusive as sports get. It’s also based on a long list of traditional martial arts, some of which have origins dating back hundreds of years. Hopefully, the archaic opinion that our sport is nothing more than human cock-fighting will soon fizzle out completely.

What do you think of Meryl Streep’s opinion on MMA? Sound off, PENN Nation!