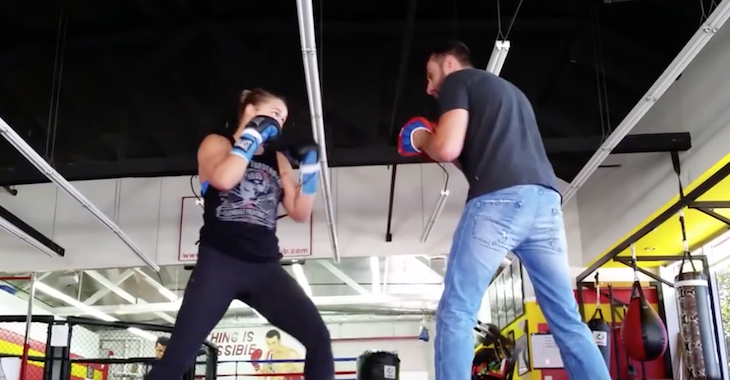 In the time since her UFC 207 loss to Amanda Nunes to close out 2017, Rousey has continued to receive criticism for her underdeveloped striking. In addition, Rousey’s head coach, Edmond Tarverdyan, has received quite a bit of criticism for his role in providing Rousey with what many believe to be a false sense of confidence in her striking. Last week, it was revealed that fellow UFC women’s bantamweight Raquel Pennington trained with Rousey leading up to UFC 207, and had even signed an NDA preventing her from discussing the training. Now, in an interview with SkySports, two of Rousey’s training partners have opened up on their experiences training with the former champ.

Olympic boxer Mikaela Mayer, who trained with Rousey before UFC 207, explained to SkySports:

“We went at it 100 per cent,” Mayer says about their sparring. “For me, as an Olympic-style boxer, it was good work because she gave me that style. She lets her hands go, she punches hard. She kept coming forwards so I had to punch in combinations, I couldn’t just throw two. When she got on the inside, I had to work her body.”

In addition, former WBC champion Diana Prazak, who trained with Rousey prior to her UFC 193 showdown with Holly Holm, stated: “She was stiff, she’s not a striker, and you don’t punch a puncher,” Diana Prazak, a former WBC champion, said about Rousey’s latest defeat exclusively to Sky Sports.

“She’s not a boxer, that’s not something you pick up in a couple of months. I started working with Ronda over two years ago but, but when she was going to fight Holly Holm, they stopped me being her sparring partner.”

“My opinion? It wouldn’t have been good for her confidence to keep sparring me, and not being successful. Edmond made that decision. She isn’t a striker.”