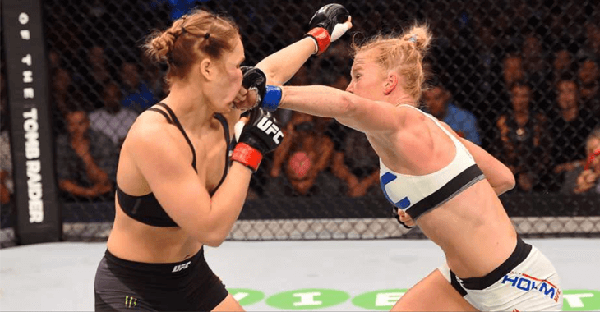 In November of last year, Holly Holm shocked the world by ending the seemingly unshakeable reign of long-time women’s bantamweight champion Ronda Rousey. She did so with a highlight reel, second-round head-kick knockout. It was far and away the biggest moment of her career.

Unfortunately, things have not gone well for Holm since then. In her first defense as champion, she gave up an early lead to surrender to a fifth-round rear-naked choke applied by Miesha Tate. In her next bout thereafter, Holm failed to get back on track, giving up a unanimous decision to Valentina Shevchenko in a fairly forgettable fight. These two losses have deflated most of the mystique she gained by knocking out Rousey.

The past year has not been any kinder to Rousey. While Holm lost two fights, she at least fought. Rousey, meanwhile, spent the entire year in hiding, leaving fans to question her mental state and wonder if she had the courage to return to the cage.

Luckily, Holm and Rousey will both soon have the chance to rebound from their tough years. Rousey is up to bat first. She’ll make her long-awaited comeback on December 30, when she’ll take on reigning bantamweight queen Amanda Nunes in the main event of UFC 207. Several months later, at UFC 208 on February 11, Holm will take on Germaine de Randamie in the inaugural UFC women’s featherweight title fight.

If Rousey and Holm are victorious in these fights, of course, it’ll open the door to a massive rematch between them–possibly with two belts on the line. In a recent press conference, however, Holm explained that she hasn’t given this possibility much thought.

“I don’t think about it because there’s a lot that has to happen,” Holm told the media. “That’s what I say when people ask me about it. ‘Hey don’t you want to rematch Ronda?’ I’m like well there’s a fight that’s taking place Dec. 30 and there’s still a fight taking place Feb. 11 and depending on how both of those go, that could be the make or break of everything, who knows what will happen in three months.”

“Anything can happen in three months.”

“As much as that was a big night for me, I’m ready for my own time to shine again and I guess I really haven’t thought a lot about it.”

Do you want to see Rousey and Holm rematch if they’re both able to reclaim UFC gold? Sound off, PENN Nation!