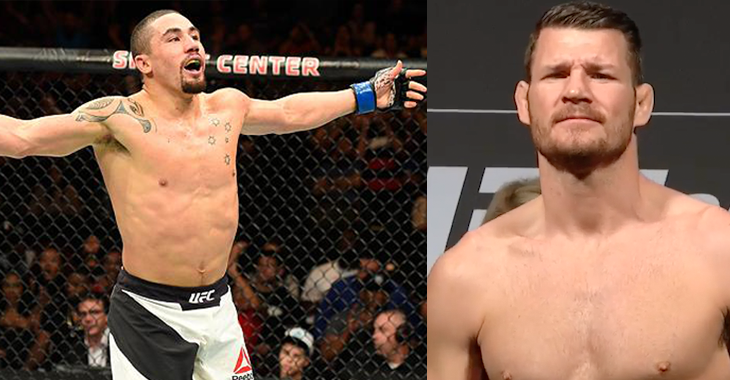 There is a new name that was recently established as one of the threats to the UFC middleweight title.

Robert Whittaker’s second round TKO over Ronaldo “Jacare” Souza at UFC on FOX 24 really put the division on notice and notched Whittaker up three spots on the official UFC rankings from the #6 spot to the #3 position falling right behind #1 ranked Yoel Romero and #2 ranked Luke Rockhold. With Bisping saying that Whittaker deserves a title shot over Romero, the Australian fighter told The Sydney Morning Herald that he doesn’t think it’s a good idea to take any fight unless it is for the title next.

“I don’t see why I should,” said Whittaker.

“Bisping has said I’m the No.1 contender so I don’t see a reason for me to fight until he’s done with Georges.

“I’ve put the division on notice that I can stop anyone,” said Whittaker who pointed out that no other UFC contenders have been able to finish Jacare in the Octagon.

With his mind set on fighting for the title, Whittaker says it isn’t particularly a fight with Bisping that he is shooting for. The person he has in his sights set on is whoever is holding the UFC middleweight title.

“I’m not after Bisping. I’m after that belt. If Bisping gives it to his neighbor, I’ll fight his neighbor. I want that belt and I think I’ve earned the right to get that belt.”

Whittaker is backed heavily by his fellow Australians and is more than happy to represent his country in the Octagon. It’s a great asset to have as UFC President Dana White recently noted that being backed by your fans can play a big part in fighter pay.

“Me going up against the world with Australia behind me and the Australian flag with me, it’s my dream. I love going out there and knowing I’m representing the nation and making people proud.