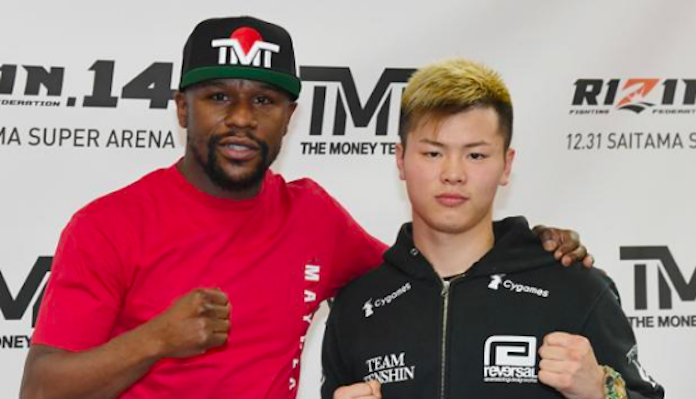 On Monday night (Monday morning in North America), in the main event of the action-packed RIZIN 14 card inside the hallowed Saitama Super Arena in Tokyo, Japan, boxing legend Floyd Mayweather returned to the ring for an undeniably bizarre exhibition bout with undefeated kickboxing wunderkind Tenshin Nasukawa.

The rules for the bout were as follows:

Despite the restrictive rules of this bout, which effectively took away Nasukawa’s most dangerous weapons, it was all made quite interesting by the fact that Floyd Mayweather seemed to be taking it very lightly, while Nasukawa seemed to be approaching it with extreme focus and determination.

In the end, however, Mayweather seemed to be taking the fight quite seriously after all.

Towering over Tenshin Nasukawa, who has fought as light as 121 pounds in the past, Floyd Mayweather unleashed heavy leather from the opening bell, throwing caution to the wind in a way we haven’t seen him do in ages.

Before long, he’d dropped his Japanese foe with a punch. Not long thereafter, he did it again. And then, despite the very best efforts of Tenshin Nasukawa to hang in there, Mayweather floored him once more.

This time around, the Japanese fighter’s corner decided to throw in the towel and call it a night.

See the fight-ending sequence below:

The good news for Tenshin Nasukawa — if there is any — is that his undefeated record is technically still intact.

Post-fight, Floyd Mayweather reminded that both he and Tenshin Nasukawa are both still unbeaten, and assured that the whole strange spectacle was all in the name of entertainment.

He also promised that he is still retired. Funny, I could swear we just watched him fight.