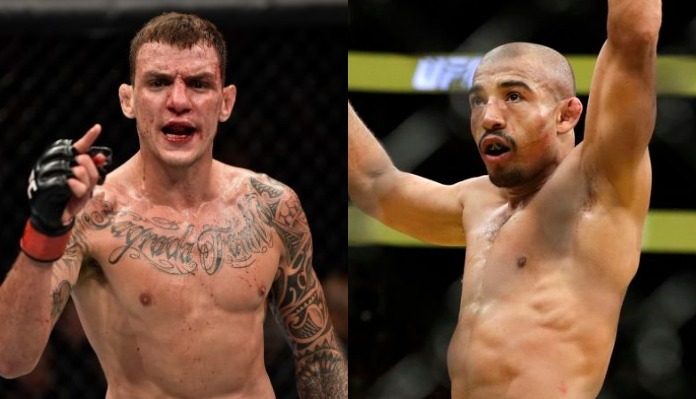 Earlier this month, in the wake of his first-round submission of Cub Swanson, surging Brazilian featherweight contender Renato Moicano called for a fight with former champion Jose Aldo.

From the sounds of it, this is still a fight that Moicano wants, even though he considers Aldo a person hero.

“He’s an idol in Brazil, he’s an idol for me, but we have to be the most professional possible,” Renato Moicano told MMA Fighting this week. “It makes sense for the UFC, and the winner would go to a title fight next. What I really wanted was fighting [Brian] Ortega in a rematch, but he won’t fight anyone, he wants to wait to fight Max Holloway for the undisputed belt. We have to do other fights in the meantime, and I’m interested in fighting someone ahead of me.”

While Renato Moicano has unending admiration for Jose Aldo, he assures this admiration would not hinder his performance in the prospective fight.

“We don’t think about none of that when we’re in the cage, we go there to win the best way possible, but it was really hard for me to challenge him the way I did,” Moicano said. “However, if we were competing in any other sport people would see it as something good. Imagine competing against Pele in soccer or Guga [Kuerten] in tennis. It should be the same thing in fighting.

“Sharing the Octagon with Jose Aldo would be an honor for me,” he continued. “The fact that people talk about this fight and say it makes sense already makes me happy and honored. It would be a dream come true for me.”

So how does Renato Moicano envision this fight unfolding? He’s imagining a war on the feet, given Aldo’s legendary takedown defense.

“He doesn’t show much [of his ground game] because his takedown defense is almost impenetrable,” Moicano said of Aldo. “I don’t think anyone has ever taken him down, and if someone did, he came back up right away. I think it would be difficult to see both of us on the ground, so I think it’s going to be a stand-up fight.”

Does a fight between Renato Moicano and Jose Aldo interest you? Who do you think wins?