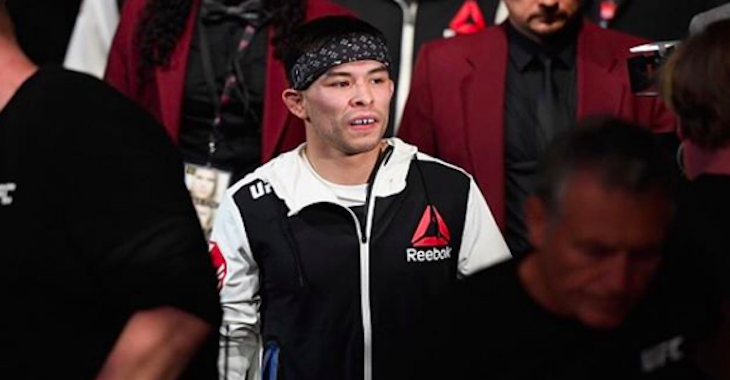 Last night, in the co-main event of the stacked UFC 216, Ray Borg stepped into the cage with perhaps the greatest fighter to ever do it: UFC flyweight champion Demetrious Johnson. Borg sought not only to steal Johnson’s flyweight belt, but also spoil the champ’s record-breaking 11th straight title defense.

Though Borg put forth a valiant effort, he was more or less outclassed for the duration of the fight, and in the end, he was finished in the most emphatic way possible. Mid-way through the 5th round, Johnson slammed him to the canvas, locked up and arm-bar mid-way through the maneuver, and seconds later, after a brief struggle, coaxed out the tap.

Obviously, this is not the way Borg wanted the fight to go. Now the latest feature of Demetrious Johnson’s absurdly impressive highlight reel, he’ll have to return to the drawing board and work his way back to another title shot.

Though Borg hasn’t said much post-fight, he did take to Twitter in the hours after his failed title bit with a short but sweet statement. See it below.

Sorry guys, it’s just not my time yet.

This loss to Demetrious Johnson marked the end of a nice, two-fight streak for Ray Borg. Johnson himself, meanwhile, has now defended his title more times than any fighter in UFC history – even the great Anderson Silva.

What do you think is next for Ray Borg? Do you think the 24-year-old flyweight contender will battle for gold again in the future? Join the debate in the comments section.