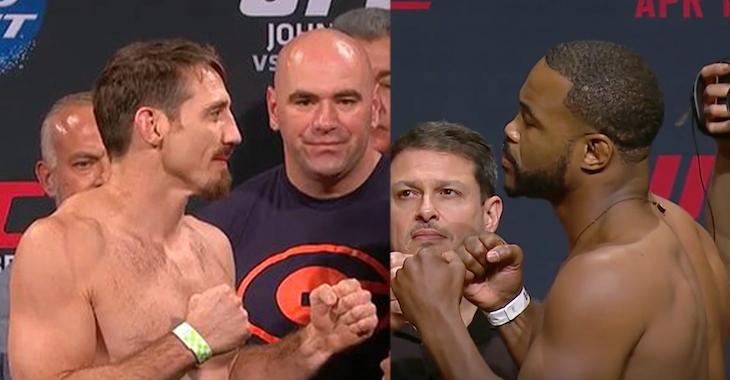 Rashad Evans has his hands full for his middleweight debut as he takes on the always-dangerous Tim Kennedy. While Kennedy hasn’t fought since 2014, he does already hold a dominant win over the current champion in Michael Bisping.

“Suga” Rashad spoke exclusively to BJPENN.COM Radio and discussed his experiences training with Kennedy and revealed some excellent behind-the-scenes information on his upcoming opponent for UFC 205.

“I match up pretty good with Tim, we trained together two times, and he was a great training partner, he really helped me out. He’s just a really good guy. “

“I was a little disappointed when I heard he was talking trash, but it was it is. It’s the fight business, not the friend business. He was talking like “oh Rashad, he asked to fight me”. Look, I don’t ask for fights, I don’t ask for anybody. They say “hey, this is your fight”, and I’m just happy to fight anybody. I look at the sport much different than I did before. I just want to fight.” “There was a lot of mutual respect (when we trained together). It was a good back-and-forth. We worked the ground game and transitions into takedowns, stuff like that. I’m pretty familiar with his game. I’m sure he’s gonna try to clinch me up. It has been a long time since we trained together, but I know what Tim likes to do, he knows what I like to do, so it’s just gonna be a chess match.”

“His ground and transitional grappling, it’s really exhausting and he’s done it to a lot of fighters, a lot of good fighters. Michael Bisping was a really hard guy for me to hold down, and he (Kennedy) held him down with no problem. Tim’s good like that. He’s not the easiest matchup for my middleweight debut, but I know if I can get by a guy like this, I can take on whatever the division has to offer.”

Evans and Kennedy will share the cage at UFC 205 on November 12 for the UFC historic first-ever event in New York State.

Who do you see winning this fight between Evans and Kennedy? Sound off, PENN Nation!