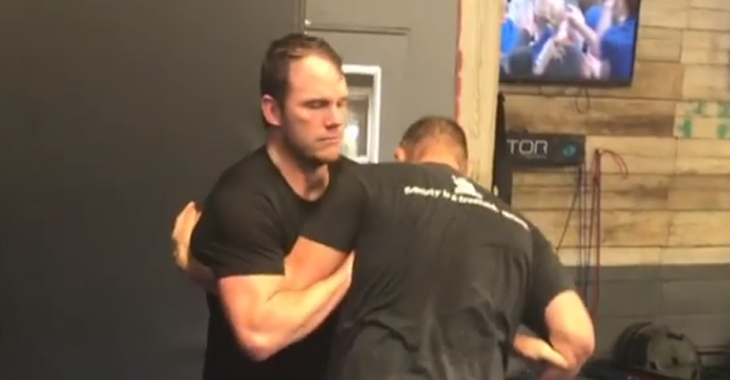 Every now and then planets align and something special happens. We’re going to be blessed with Daniel Cormier fighting Stipe Miocic in July, as well as a slew of other big match-ups that the UFC supposedly has in store for later this year. However, there is something that even the great powers of the Ultimate Fighting Championship couldn’t bring together. Something only the mystical powers of the galaxy could bring together. A clash of titans. A scrap of absolutely epic proportions. Starlord locking up with Captain America.

“A couple weeks ago I had the great privilege of training with UFC Hall of Famer Randy ‘The Natural’ Couture in Hollywood. Luckily he took it very easy on me. Randy first coached me when I was 17 at Oregon State University wrestling camp. After a greco roman training session consisting of throws he invited teenage me to come up and demonstrate the three throws we’d learned that day: the underarm spin, lateral drop and head and arm. It was such an honor. Everyone cheered as I slammed Coach Couture to his back. Not once, not twice, but three times.”

.@prattprattpratt placed 5th in Washington state tourney at 215 lbs as senior and was executive producer and narrated “On The Mat,” a documentary about wrestling team at alma mater Lake Stevens HS. @Randy_Couture is our Outsntanding American for 2018 https://t.co/vKttZPMYAs https://t.co/vsKHtF2f8A

“A few years later I was one of millions watching on TV as Randy entered The Octagon for the first time and dominated, eventually winning and defending the heavyweight title for years. He is a Pacific Northwest native and all around great dude. Gotta love the wrestlers mentality and work ethic. It’s a great sport which helped keep me out of trouble when I was younger and taught me to grind. I’ve always said it, wrestling made me who I am today. I dedicated years of my life to grappling. I still love it. Take your sons and daughters to a wrestling practice. It’s important our kids have adults to look up to outside of their parents. Here’s a shout out to all the coaches out there making a difference. Big thanks to Randy.” — Chris Pratt via his official Instagram.

Goofy frontman of Mouse Rat from Parks & Recreation, star of Guardians of the Galaxy, and the upcoming sequel to Jurassic World, Chris Pratt was reunited with an old wrestling coach. You may have heard of him, former UFC heavyweight and light heavyweight champion Randy Couture? The two celebrated with a little wrestling practice and it looks like Couture held his own with the younger former pupil. It looks like Pratt can defend the galaxy, as well as a takedown. On top of it all, Pratt used the reunion to drop and inspirational message to parents about getting their children involved in wrestling.