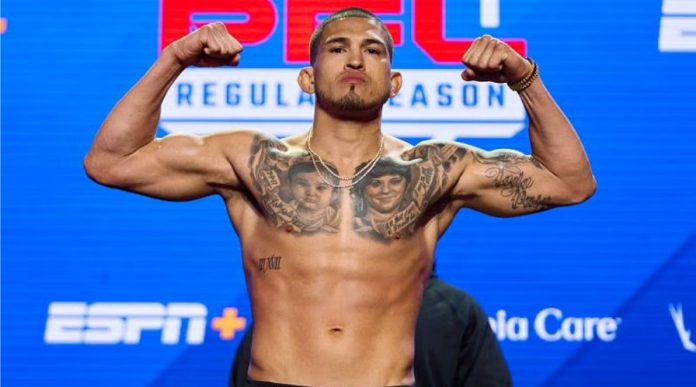 Anthony Pettis is glad to be rematching Stevie Ray.

Pettis and Ray fought at PFL 5 in June and heading into the fight it was an odd one for ‘Showtime’ given that he already had his playoff spot booked. With that, he says the plan going into that fight was to play it safe and not get hurt which ended up costing him as Ray got the second-round submission win.

Now, Pettis and Ray will rematch in the main event of PFL 7 in the semifinals of the lightweight tournament.

“The PFL format is dope, I get the rematch right away and this one matters a lot more. It was weird having two fights booked back-to-back,” Pettis said on Just Scrap Radio on BJPENN.com. “The game plan going into the last fight was to play it safe and try and avoid injuries and it backfired on me… I already trained for this guy, I studied him already and I’m going to fight the fight totally different. I’m not going to go out there southpaw and play kick game with him, I’m going to go out there and bite down on my mouthpiece and finish him.”

Although Pettis was playing it safe against Ray, he says he has watched the fight and has taken quite a bit away from it. He believes he did quite well when he fought orthodox which is how he will fight Ray in the rematch.

“I just watched it not too long ago to see how he was pressuring me,” Pettis said. “I was doing well on the feet even as a southpaw, I did switch to orthodox for a little bit and I hit him with a knee punch combo and hurt him with a high kick and I didn’t capitalize on it because I was playing it safe, I didn’t go out there and finish him like I usually do. So, I did watch it to see how he was fighting but my fighting style is going to be totally different.”

With Anthony Pettis expecting to be a different fighter against Stevie Ray, he is confident he will eventually find the stoppage and advance to the finals.

Should Pettis beat Ray, he will be one win away from winning the PFL lightweight belt. If he ends up winning the title, he would be a three-promotion champion as he also won belts in the WEC and UFC.

With that, the pressure is on Pettis but this could also be his final shot as he revealed this is the final season under contract with the PFL.

“This is my last season under contract so we have to figure out what happens after this one,” Pettis said. “My big goal is to become a three-promotion champion. I won in the WEC, I won in the UFC and now I have a chance to do it in the PFL, I’m two fights away from it… It will be huge for my legacy, what I did in the UFC is already cemented and will be never taken away, right now I’m writing new history, and winning the belt here cements me as one of the best of all time.”

Do you think Anthony Pettis will beat Stevie Ray?