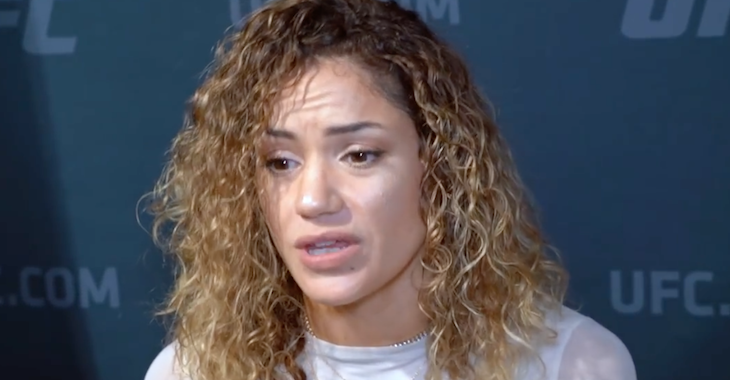 Friday morning, UFC light heavyweight champion Daniel Cormier made headlines as he missed weight for his scheduled UFC 210 title fight with Anthony Johnson tomorrow night in New York. Cormier then made headlines once again as he controversially made weight by pressing on the privacy towel, offsetting his weight and aiding him in appearing to have lost 1.2 pounds just two minutes after he weighed in overweight.

Another bit of news that was overshadowed by Cormier’s weigh-in mishap was the fact that UFC newcomer Pearl Gonzalez was pulled from the card last minute due to having breast implants, which are not allowed inside the cage in New York. Interestingly enough, it has been pointed out that the no implant rule was made several years ago when MMA was still illegal in New York, and was made with female boxers in mind. The UFC has yet to comment on Gonzalez’ situation, and has yet to announce whether or not they will attempt to find Gonzalez’ opponent, Cynthia Calvillo, a replacement opponent on short notice.

MMAJunkie spoke to Calvillo’s Team Alpha Male head coach Justin Buchholz to discusses the situation, who revealed that while Gonzalez was pulled from the fight, he is still operating under the assumption that the UFC is working to salvage the fight despite the fact that there is nearly 24 hours to go until his fighter is supposed to step into the Octagon.

Gonzalez being pulled from the card has raised some questions from the MMA community on social media regarding her pay given that when the UFC offered her the bout, she already had implants. In addition, Gonzalez made weight for the fight, leading many to call for the UFC to pay Gonzalez her ‘show’ money given that she made weight.