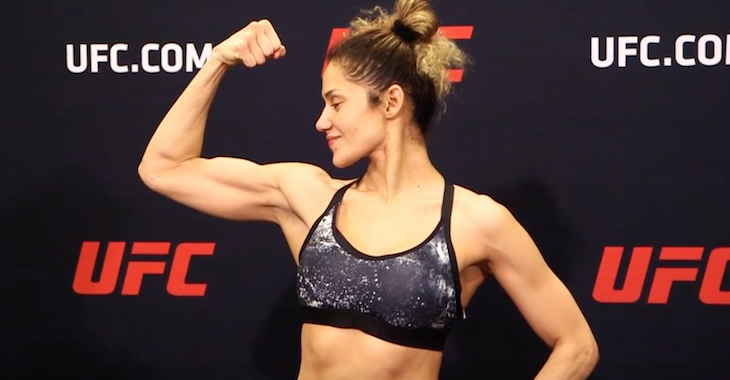 Friday afternoon, after UFC newcomer Pearl Gonzalez weighed-in for her scheduled UFC 210 scrap with Cynthia Calvillo, she was informed by the NYSAC that she would not be allowed to compete on Saturday night due to her breast implants. The MMA community was quickly enraged over the matter, given that the rule was made several years ago, when MMA was illegal in New York, and made with female boxers in mind.

Ultimately, after a period of uncertainty, Calvillo was granted permission to fight. During a press conference following the incident, which was transcribed by MMAFighting, Gonzalez opened up on the drama, saying: “As I was finishing up my medical clearance after my weigh-in, the commission told me I would not fight. I think at that moment I was a little upset.”

“I was a little appalled and I said ‘OK, can I talk to my team?’ and the commissioner said ‘Yes,’ and I walked out of the room, and that was that,” she said. “I took a couple minutes, I regrouped myself, I came out and talked to my team, I looked at my team and said, ‘There’s no way this is off. We’re fighting. Let’s stay focused, let’s stay positive. We’re fighting tomorrow night.’”

“I’ve never heard of such a thing,” she said. “I’ve put it in my paperwork, I’ve never lied about it, which is when they asked me if I have had a surgery, I told them. I was surprised, but there’s nothing I can do about it. I’m just riding my wave, enjoying this.”

While the fiasco was a very public one, Gonzalez is determined to not let the confusion deter from her highly anticipated UFC debut. “At the end of the day, it’s out; there’s nothing I can do about it. I’m not going to dwell about it,” she said. “I don’t think I wanted the world to know about my surgery and to be talked about like this. I have worked very hard to show how talented I am. I have a lot to bring to this division. And that’s what I would like to be known for.