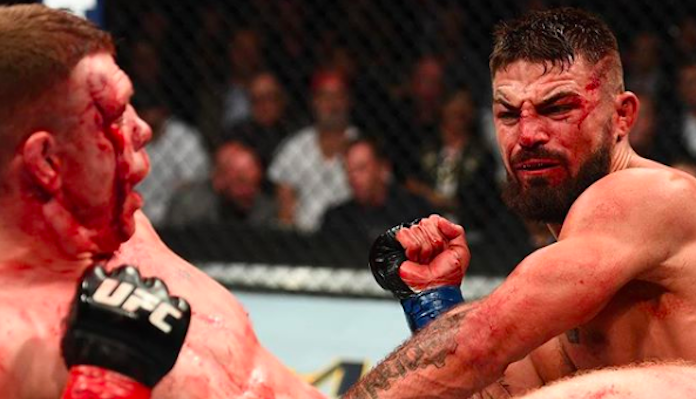 Ahead of UFC 226, this fight was looked at as a sure-thing in terms of violence. And unlike Derrick Lewis and Francis Ngannou’s co-main event battle, it actually delivered.

For three rounds, Perry and Felder pummelled each other with thunderous punches, and tore into each other’s faces with slashing elbows. Even when Felder appeared to break his arm mid-fight, the action continued, surging along at a frenetic pace until the final horn sounded.

Once the fight was over, and Perry had been awarded a split decision victory, Felder needed fairly urgent medical attention — not just for his injured arm, but for the many slices that criss-crossed his face. Unfortunately, it doesn’t sound like the all-action lightweight star’s hospital visit was particularly pleasant.

From the hospital, Felder shared a selfie that showed him caked in dried blood, having clearly not even been wiped off by his caretakers.

Still waiting for stickers… and um thanks for cleaning me up. This hospital sucks pic.twitter.com/hdge0xmae1

“Still waiting for [stitches]… and um thanks for cleaning me up,” Felder said in his post. “This hospital sucks.”

With this loss to Perry, Felder returns to the loss column after a trio of stoppage wins at lightweight: over Alessandro Ricci, Stevie Ray and Charles Oliveira. He’s now 15-4 overall.

Perry, meanwhile, rebounds from back-to-back decision losses to Santiago Ponzinibbio and Max Griffin. He currently owns an overall record of 12-3. From the looks of it, he didn’t have a particularly fun time getting patched up post-fight either.

What did you think of Paul Felder and Mike Perry’s epic UFC 226 scrap?