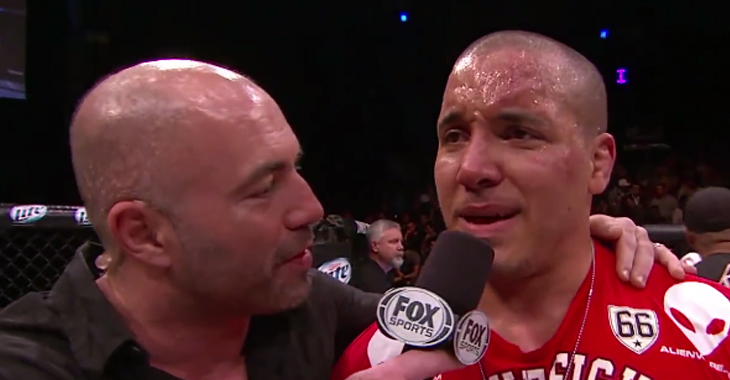 If the name “Hype or Die” Pat Barry doesn’t ring any bells, he had a laundry list of epic K-1 fights and enjoyed an on-and-off success in the UFC. He’s probably best known for screaming motivating speeches into his longtime partner, Rose Namajunas’ face before fights. This was a sight curiously absent from Thug Rose’s last trip to the Octagon. Recently, the couple even dropped off of social media completely. This all culminated with Barry appearing on The MMA Hour for a gripping tell-all about pill and alcohol addiction, including the exact moment he hit rock bottom. It just so happens, it was during his training with Brock Lesnar for UFC 200.

“That was the moment, I realized, I can’t get out of this cell if they don’t let me out, I can’t get out. Me, ‘Gorilla Pat,’ I can’t physically break out. I can’t talk my way out. The one person I called hung the phone up, and didn’t answer, Rose. [She was] disappointed. I figured out this doesn’t need to go any further. I realized, s–t needs to change and s–t needs to change now.” — Pat Barry on The MMA Hour. “Go back to any of Rose’s performances that didn’t seem quite right. It was me,” he said. “I was the outside distraction. This guy. Any performance. I’m not talking about just fighting. Any interview that seemed off and weird, any post on social media, it was my f—king fault. So I said, I’m not doing that no more. She should’ve been world champ two years ago. It was me. I didn’t know it was me, but it was me.”

Only Pat Barry can make a story about almost getting into a drunken fight at a pizzeria, while his life spirals out of control funny. However, this is just a small excerpt from a much larger interview that got super real, really quick. He completely blamed himself for any bad performance from Namajunas, who also was overwhelmed with emotion sitting with Barry during the conversation.

The good news is, Barry is a year clean and sober. His brave admission of his abuse also sheds a larger spotlight on athlete suffering from prescription pill addiction. He’ll return to competition on November 18th to fight Eric Prindle, but to also win the fight with himself.