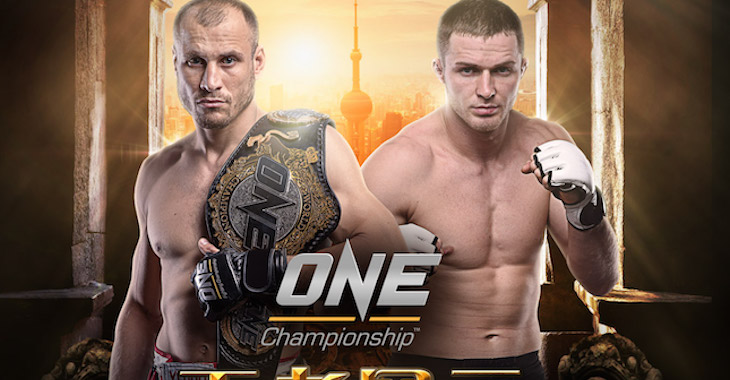 The lineup for next month’s ONE Championship 30 fight card is complete, with a total of nine exciting bouts for fans to look forward to wacthing.

“ONE Championship 30: Dynasty of Champions” takes place September 1 live from the Mercedes-Benz Arena in Shanghai, China.

Igor “Lionheart” Svirid became the ONE FC middleweight world champion in November, this after scoring a 17-second knockout win over Leandro Ataides at ‘ONE FC 22’. The 29-year-old Kazakhstani figther is currently riding a ten-fight win streak, which includes seven finishes to his credit.

Meanwhile, Vitaly Bigdash is set to make his ONE FC debut after a stellar run in ProFC. The undefeated Russian was most recently seen in action in March, where he earned a submission victory over Magomed Magomedkerimov at ProFC 57. All seven of Bigdash’s career victories have come by way of stoppage.

Roger “El Matador” Huerta was last seen in action at ‘ONE FC 19’, where he scored a first-round TKO victory over the previously undefeated Christian Holley. The 32-year-old Tiger Muay Thai product will be looking to earn a ONE FC title shot against Shinya Aoki with a win over Ando in September.

Japanese lightweight standout, Koji Ando, will be looking to rebound after suffering a loss to lightweight champion Shinya Aoki at May’s at ONE FC 27 event. Prior to the setback, Ando had strung together five-straight victories, with four of those five wins coming by way of stoppage.

Here is what ONE Championship CEO Victor Cui had to say about the September 1 event in Shanghai:

“We are excited to make our mark in Shanghai this September as we bring the best local and international fighters once again to mainland China,” ONE Championship CEO Victor Cui stated. “This card is headlined by a ONE middleweight world championship title bout and it will be very exciting to see our Kazakhstani world champion defend his title. We also have a roster of the best international fighters showcasing their talents in the ONE cage such as Roger Huerta, Dae Hwan Kim, and Kotetsu Boku. Also, our female MMA warriors will show combat sport fans around the world what women can do inside the cage. Local flyweights will also be competing to be the best and the chance to be the winner of our ONE Shanghai flyweight tournament.”

The full ONE Championship 30 fight card looks as follows:

Stay tuned to BJPENN.com for all your major ONE Championship news!