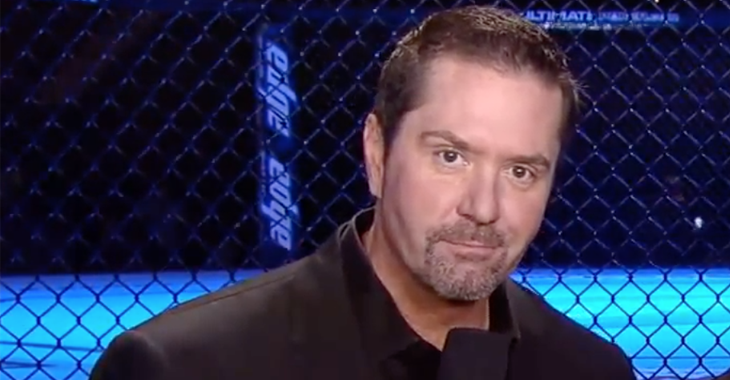 Mike Goldberg is returning to work in the world of broadcasting for mixed martial arts.

The former voice from the Octagon hinted a return back in February saying, “You’ll see me around soon.”

On Tuesday, Bellator released a statement announcing that Goldberg and former voice of PRIDE and Strikeforce, Mauro Ranallo, have been signed to join their broadcast team.

From the Bellator statement:

Bellator has signed longstanding MMA commentators Mike Goldberg and Mauro Ranallo to multi-event broadcast agreements beginning with Bellator NYC: Sonnen vs. Silva and Bellator 180: Davis vs. Bader on Saturday, June 24. The move sees Goldberg return to SPIKE for the first time since 2011, while Ranallo reunites with Bellator President Scott Coker, having worked together through 2013. The pair will join a broadcast team that currently includes Jimmy Smith, Jenn Brown and Chael Sonnen. “Mike Goldberg and Mauro Ranallo are two of the best in our business and I couldn’t be happier about them joining the Bellator family,” said Scott Coker in the statement released on Tuesday. “In addition to June 24, we look forward to working together to make future Spike broadcasts even more exciting for our fans as we add further depth to an already-exceptional broadcast team.”

“The addition of highly-regarded announcers Mauro and Mike to our fantastic lineup of broadcasters, and our first-rate production led by Scott Fishman, further demonstrates our commitment MMA fans and expanding the global Bellator brand,” added Spike SVP, Sports and Specials Jon Slusser. Many fans and some fighters were a bit put off by the way the UFC quietly sent off Goldberg after the many years and events with the promotion. Goldberg himself was nothing but thankful for being able to be a part of the UFC and the growing sport of mixed martial arts.

What are your thoughts on Mike Goldberg and Mauro Ranallo joining Bellator? Let’s hear it in the comment section!