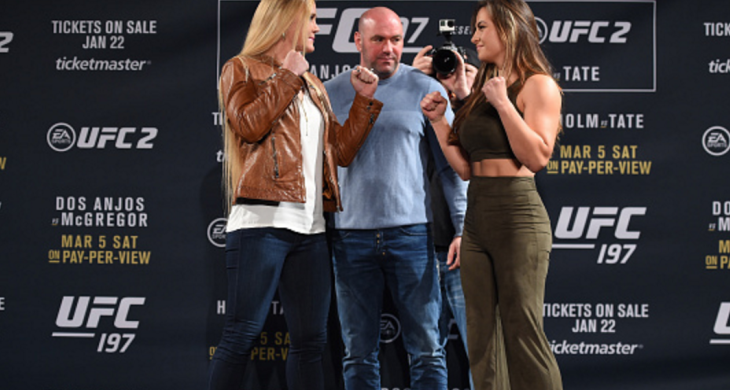 Miesha Tate is a big fan of Holly Holm’s polite character and they have been friendly to one another even after Tate put Holm to sleep with a rear-naked choke at UFC 196.

However, Tate revealed on Joe Rogan’s podcast last week that she has a problem with Tate’s manager Lenny Fresquez.

“She’s so nice. She’s such a sweetheart. I’m not a fan of her manager, though,” Tate told Rogan (transcribed by FOX Sports). “I don’t even know if I’ve ever met him in person, I probably haven’t. Maybe I have. If I did, it wasn’t memorable.

“Anyways, Dana (White) told me this — Dana went down to Albuquerque before this fight ever came together, of her and I, and he said ‘look, you guys need to wait for Ronda (Rousey)’. ‘Trust me, that’s the big money fight, that’s the fight you want to wait for.”

Tate said that White told her the story in person, but Fresquez’s cocky attitude ended up costing Holm and her team.

“He told me this to my face,” Tate said about her conversation with White. “He went down there to tell them ‘don’t fight Miesha Tate’. The UFC did not want that fight to happen. They wanted the rematch to be the first fight. Holly’s manager told him ‘we want Miesha Tate’ and Dana said he threw up his hands and was like ‘are you (expletive) kidding me?’.

“He’s like ‘she’s been the baddest (woman) other than Ronda for years now, and you want to take her lightly? You think you’re just going to walk through her?’ and he’s like ‘yeah we got this’. Like she’s going to be a tune up fight.”

“I don’t even know his name, I don’t know, he’s an idiot,” Tate said. “But he told Dana that they thought that I was going to be a tune up fight.”

Miesha Tate is now set to defend her belt for the first time at UFC 200 in July against Amanda Nunes.