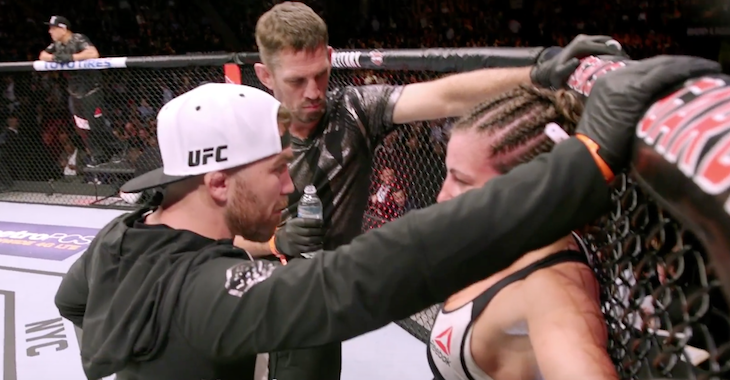 This past weekend at UFC 205, former UFC women’s bantamweight champion Miesha Tate stepped into the Octagon to fight Raquel Pennington in the kickoff bout for the main card of UFC 205.

Tate, who lost the women’s bantamweight championship to Amanda Nunes at UFC 200 via 1st round submission, was looking to return to the win column with a win over Pennington, who she coached on The Ultimate Fighter season 18 back in 2013. The fight didn’t go Tate’s way as she was nearly caught in a guillotine choke early in the fight, before ultimately dropping a unanimous decision.

In the UFC’s ‘UFC 205: The Thrill and the Agony’ preview, cameras caught an exchange between the former champ and her corner, as she reflected on the fight, and then informed them that she doesn’t want to continue fighting, before then going on to make her retirement speech in her post-fight octagon interview.

“I’m not showing up anymore in here. I don’t care enough. I just, I don’t have it anymore.”

She then informed her boyfriend Bryan Caraway:

Tate then went on to give her retirement speech, saying:

“I want to say congratulations to Raquel, I’m proud of her, she was a member of my team, and I’m excited to see her do so well. But, I’m announcing my retirement you guys. I love you all so much. I’ve been doing this for over a decade. Thank you so much for being here, I love this sport forever, but it’s not my time anymore. It’s the future’s time.”

“It’s because of the result [of the fight], I had a lot more to give, but I couldn’t pull it out of myself. It’s been a long time, taking a lot of punishment. I still love this sport, I love you guys, thank you so much, but this is it for me.” Only time will tell if Tate will stick to retirement, or change her mind once she moves past the loss to Pennington, and return to the Octagon for one final fight.