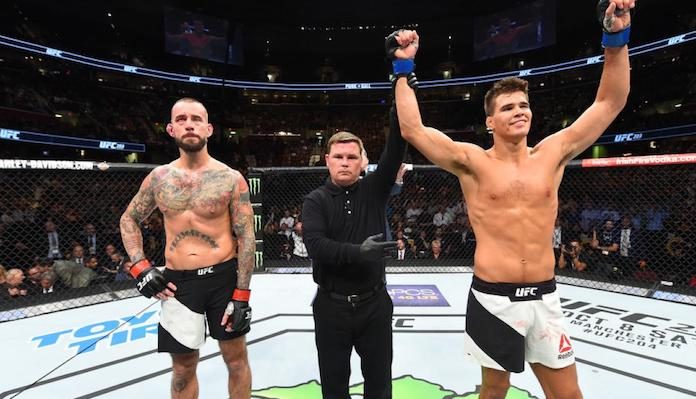 This Saturday night, in the first bout of the stacked UFC 225 main card, former pro wrestler CM Punk will compete in his second mixed martial arts bout. His opponent in this sophomore effort will be Mike “The Truth” Jackson.

Heading into this fight, Punk and Jackson are both 0-1 as professional mixed martial artists. Both of their losses, interestingly, came courtesy of the same man: one Mickey Gall.

On Wednesday afternoon, Gall was asked by Ariel Helwani which of his two previous opponents he’s picking to win at UFC 225. He acknowledges that Jackson, who has competed as a professional kickboxer, has more martial arts experience overall, but he also noted that Punk technically has more experience in the Octagon. For that reason, he’s picking the former professional wrestler.

I asked @mickeygall who he thought would win between CM Punk and Mike Jackson this weekend. He’s their common opponent after all.

“MJ does have more experience,” he said. “He has more hard-wired skill. MJ should win.

Gall added, “Punk lasted 2:14 with me, which is pretty impressive. MJ lasted only :45. Punk has almost triple the time of ufc experience.”

“MJ does have more experience,” Gall told Helwani, who is on-scene in Chicago for UFC 225. “He has more hard-wired skill. MJ should win. But I’m picking CM Punk.”

“Punk lasted 2:14 with me, which is pretty impressive,” Gall added. “[Mike Jackson] lasted only :45. Punk has almost triple the time of UFC experience.”

So, there you have it. The man who deprived both Punk and Jackson of an MMA win is picking the former to come out on top. What do you think of Mickey Gall’s prediction for this anticipated UFC 225 bout between CM Punk and Mike Jackson? Join the conversation in the comments section.