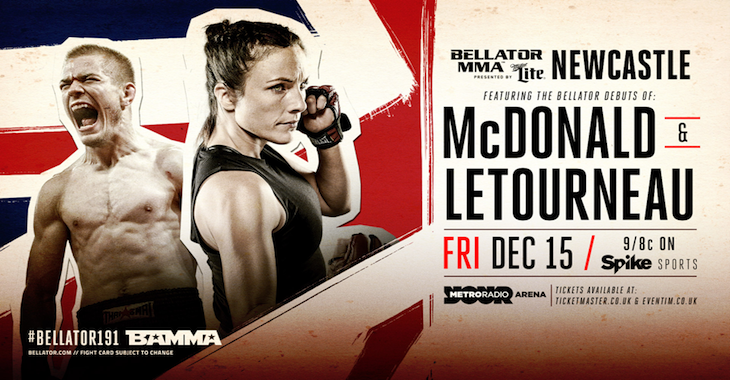 The long-awaited Bellator debut for former UFC bantamweight Michael McDonald was made official on Wednesday in a press release sent out by the promotion.

McDonald will fight Peter Ligier, a French fighter with an 8-1-1 record, including five finishes. McDonald hasn’t fought since  July of 2016 against John Lineker. Lineker won that bout via knockout bringing McDonald’s UFC record to 6-3. During that time he won five fight night bonuses and challenged Renan Barao for the interim bantamweight championship.

In addition to McDonald, former UFC women’s strawweight title challenger Valerie Létourneau will make her Bellator debut against Kate Jackson who fought and won in Bellator this past August.

Létourneau is on a three-fight losing skid stemming from a 2015 loss to then-champion Joanna Jędrzejczyk. She was released from the promotion in December then false started at Bellator 181 when she was forced to pull out of a fight with Emily Ducote at Bellator 181.

According to the release, ‘two of Bellator’s top recent free agent signings’, will both compete on the same night, December 15th, at UFC 191.

BAMMA will also host an event during Bellator 191 as the two promotions will share the Metro Radio Arena in Newcastle, England. BAMMA is shown on the promotional poster for Bellator 191 as well. There is no word on how this will be work for the Bellator broadcast, though.

Bellator 191 will be the last Bellator event of the year. 2017 was rife with big-name signings, picking up fan favorite Roy Nelson and former Strike force champion, Gegard Mousasi among others.

Here’s a look at the full fight card: