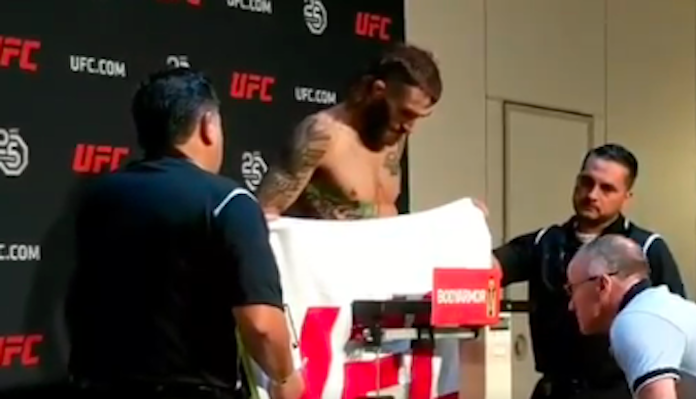 After a failed attempted on the scales during his last time out at UFC 226, The Ultimate Fighter season 15 winner Michael Chiesa is changing divisions.

Although he immediately stated after missing the lightweight mark for his last fight, Chiesa is actually going through with his plan to move up to 170-pounds as was confirmed to ESPN.

For his ideal UFC welterweight debut, Chiesa hopes to get onto UFC 232 on December 29 where he would like to face the former UFC interim and WEC welterweight champion Carlos Condit. The fight has apparently been discussed, however, Condit’s team doesn’t have any interest in the matchup despite wanting to return around the same time as Chiesa.

Unfortunately for Chiesa, he has gone 0-2 in his last two outings since 2016 with his most recent bout coming against Anthony Pettis.

Pettis and Chiesa were initially supposed to meet at UFC 223 in April but that got canceled thanks to Conor McGregor who Chiesa has recently filed a lawsuit against.

Chiesa made his debut in 2012 when he won the only live season in TUF history which was TUF 15. He would defeat his future fellow top 155-pound contender in Al Iaquinta by first round submission.

The Aurora, Colorado native would then go 6-2 until hitting his recent rough patch of two losses.

As for the opponent he hopes to be getting next, Condit has also fallen from grace a bit since his time as the interim champion. After dropping a loss to Georges St-Pierre in 2012, “The Natural Born Killer” has gone 2-6 with his lone wins coming over Thiago Alves and the now-retired Martin Kampann.

The UFC’s year-end cards are always marked on the calendar as ones to keep your eyes on and with its super fight main event between champions in Cris Cyborg and Amanda Nunes, it will be interesting to see how it takes shape in the coming weeks.